The draft Road Transport and Safety Bill 2014 aims at providing a framework for safer, faster, cost effective and inclusive movement of passengers and freight in the country with emphasis on enabling increased domestic production and promotion of the 'Make in India' mission. 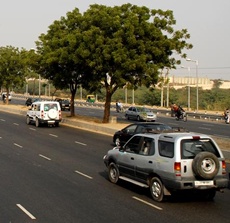 The new bill aims at a 4 per cent GDP growth on account of increased efficiency and safety of road transport sector and creation of a million jobs with increase in investment in the sector.

Besides, the new safety provisions aim at saving at least 2 lakh lives in the first 5 years due to reduction in road traffic accidents.

The draft bill proposes a unified and independent agency for vehicle regulation and road safety, which is legally empowered and fully functional and accountable to Parliament, as also an innovative financing mechanism for funding safety programmes.

Industry will be given lead-time for adopting new standards while a time-bound vehicle
type approval to promote innovation will be put in place.

The bill also provides for vehicle makers to ensure availability of spare parts at cheaper rates.

There will be a single window driver licencing system. Procedure for application and issuance for driver licensing system will be simplified and made transparent by adoption of technology for driver testing facilities.

Automated driving test will be used for increased capacity, with private sector participation, while a unified biometric system will be used to avoid duplication.

The draft bill proposes a unified registration in a dynamic information system where the manufacturer, owner, transport authority, insurer, enforcement agency will all be in one eco-system.

The bill provides for enforcement of modern safety technologies, creation of a motor accident fund for immediate relief to accident victim and places special emphasis on safety of school children and security of women and other vulnerable road users.

There will be a single national authority for improving quality of road transportation and focus will be on developing integrated transport systems and multi-modal hubs, feeder system and last mile connectivity for people friendly mobility.

For enforcement of traffic rules the draft bill proposes a combination of penalty and fines for
driving under the influence of drugs and alcohol. It also provides for electronic detection and centralised offences information to identify repeat-offenders, graded penalty point system with enhanced fines will act as a deterrent and improve traffic condition by reducing road rage.

A draft for the proposed new Act to replace the existing road safety legislative framework is placed on the official website of the ministry of road transport for seeking feedback from the public and stakeholders.