Rolls-Royce unveiled a custom-designed one-off luxury car, called Sweptail, at the Concorso d'Eleganza at Villa d'Este on 27 May. The new one-off model is not just another custom-made Rolls-Royce car, Sweptail has seen some exquisite levels of luxury. At $12.8 million(10 million pounds), it might also be the world's most expensive new car ever, according to commentators. 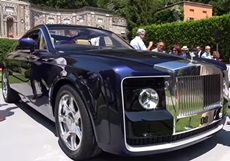 The Sweptail takes inspiration from the Rolls-Royces of the 1920s and 1930s. According to Rolls-Royce, the client of the super expensive Sweptail was a "connoisseur and collector of distinctive, one-off items, including super-yachts and private aircraft".

The idea was first shared in 2013 and it took almost four years for the automaker to make the car. The client had specifically asked that the Sweptail incorporate features from the coach-built two-seater Rolls-Royces from the 1920s and 1930s that had been reimagined on the one-off car.

The Sweptail also takes inspirations from luxury yachts, including the panoramic roof.

The front remained much like a Rolls and the Sweptail had the Pantheon inspired grille which was milled from solid aluminium, the largest on any era Rolls-Royce and got a hand to a mirror finish. The coupe also gets its unique registration number - 08 - that had been milled from ingots of aluminium and hand polished.

"... the desire was for a coachbuilt two seater coupe featuring a large panoramic glass roof. As a connoisseur of Rolls-Royces, he was inspired by many of his favourite cars from the marque's golden era of the early 20th Century, as well as many classic and modern yachts," the carmaker said.

The Sweptail incorporated perhaps the largest ever grille on any modern-era Rolls-Royce.

The two-seater coupe also featured a panoramic glass roof, one of the largest and most complex ever seen on a motor car of any marquee. The roof allowed natural light to flood the cabin and animate a host of beautifully handcrafted materials.

"It is a Rolls-Royce designed and hand-tailored to fit a specific customer," said Giles Taylor, director of design at Rolls-Royce, Stuff, reported.