Norway's MPs have reportedly agreed to ban or reduce the sale of all cars running on petrol and diesel after 2025, in a move that was promptly lauded by Elon Musk, chief executive of cutting-edge electric car maker Tesla. 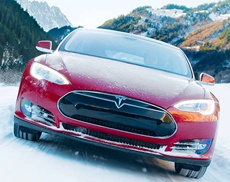 "Just heard that Norway will ban new sales of fuel cars in 2025,'' Musk tweeted. ''What an amazingly awesome country. You guys rock!!"

Norwegian Liberal Party MP Ola Elverstuen told local outlet Dagens Naeringsliv that his fellow MPs and those of the Progress Party, the Christian Democrats and the Conservative Party have reached a groundbreaking decision to meet the goals.

The goals have been outlined in the ambitious national transport plan 2018-2019 which stipulates gradually banning all types of vehicles that harm the environment such as fuel-powered cars, vans, buses and heavy vehicles.

With 24 per cent of new vehicles being powered by electric drive-trains, Norway already has the highest percentage of electric vehicle market share of any country – meaning that it's less of a leap for Norway than any other country, but it's still a big step.

Øyvind Korsberg, an MP for the Progress Party, went even further in his estimates of how far-reaching the consequences of the plan would be.

''After 2025 new private cars, buses and light commercial vehicles will be zero-emission vehicles. By 2030, new heavier vans, 75 per cent of new long-distance buses, 50 per cent of new trucks will be zero emission vehicles,'' he said, referring to the targets stated in the white paper on the energy policy mapped by the Norway's Petroleum and Energy Ministry in April. The paper requires formal approval if it is to be converted into an official policy.

The plan's implementation is closely connected to offering financial stimuli for potential electric car buyers for them to get rid of the petroleum-powered vehicles.

''People should be confident that it will be significantly cheaper with a zero emissions car than with a traditional car,'' Elverstuen said.

Conservatives cautious
However, the Conservative Party on Thursday issued a statement downplaying the report and calling it ''misleading'', as cited by ABC Nyheter.

''There is no issue of banning the sale of diesel and gasoline vehicles in 2025, although someone could have got this impression from Dagens Naeringsliv,'' said Tina Bru, Conservative Party MP and a member of the Standing Committee on Energy and the Environment. She added that the discussion focused on determining the maximum number of low and zero-emissions vehicles that ''we need on Norwegian roads in 2025 to reach climate goals''.

A conflicting report by Aftenposten then cited Liberal Party communications advisor Audun Rødningsby, saying that he fully confirmed the accuracy of the claims. This is despite Conservative and Progress Party sources telling the paper that the plan was still being discussed.

For Tesla, the world's leading manufacturer of electric cars, Norway is one of the most attractive markets, with the country being at the forefront of introducing environment-friendly technology into the life of its citizens.

In February, Norwegian Petroleum and Energy Minister Tord Lien asked the company to participate in working on a more efficient energy system for the country in return for its steady support of Tesla's products.

''Norway has always been important for Tesla, and I think it is only fair if the company also gives something in return,'' Lien told E24 as cited by The Nordic Page.