Toyota and rival Nissan today announced the recall of about 6.5 million vehicles globally in the latest recalls  over the Takata airbag issue linked to at least five deaths. 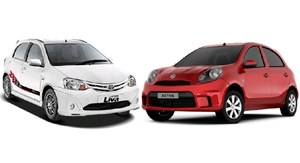 A Nissan spokesman told AFP the recall would affect many of its markets, including Japan, Europe and North America.

He added that the explosion risk was among a range of problems seen in the defective airbags.

Nissan's recall would affect a range of vehicles produced between 2004 and 2008.

According to both automakers, there were no reports of deaths or injuries linked to their latest airbag-linked recall.

The announcement comes after the recall of about 20 million vehicles produced by major automakers, including General Motors and Honda, due to the risk that their Takata-made airbags could improperly inflate and rupture, potentially firing deadly shrapnel at the occupants.

The defect had been linked with at least five deaths, and one US woman's death was initially investigated as a murder due to the nature of her injuries.

Meanwhile, Toyota said its recall would cover close to 5 million cars, including the Corolla, Vitz and other models made between March 2003 and November 2007.

According to both Toyota and Nissan, the recall was for investigative purposes and no accidents or injuries had been reported.

The company did not offer any details on the number of cars it would recall.

Honda had said in March, that it was recalling another 100,000 vehicles in the US related to the airbags.

About 25 million vehicles with Takata airbags had been recalled worldwide by 10 different carmakers since 2008.