Mahanagar Gas Limited (MGL) in association with Eco Fuel (Indian Partners of Lovato, Italy) has launched CNG fueled two-wheelers, which will run on the safe and economical fuel, contributing to a pollution-free environment. 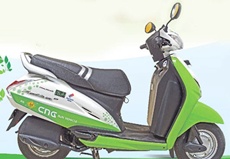 Union minister of state (independent charge) for petroleum and natural gas Dharmendra Pradhan launched the company's initiative in Mumbai, in the presence of Vinod Tawde, minister for education, youth, sports and cultural affairs and guardian minister of Mumbai suburban.

The Maharashtra government also has come out with an incentive scheme for buyers. Since teen-agers form the largest section of two-wheeler users, the first to be incentivised for clean-fuel two-wheelers are students.

Speaking at a function to launch Mumbai's first-ever CNG-fuelled scooter at BKC on Sunday afternoon, Tawde said to encourage the use of scooters powered by compressed natural gas (CNG) in Mumbai, his department plans to introduce `clean energy' credits that can be earned by students who use CNG two-wheelers or clean fuel to travel to college or for personal use.

The credits earned may get students extra marks in college exams or during admissions to vocational courses in near future.

He said that he will propose the clean energy credit scheme before the state government soon. "It will be similar to earning carbon credits. Students will be encouraged to switch 100 per cent to clean fuel while travelling," he said. The newly launched scooter, plying on CNG, will not only curb pollution but also bring down expenses to onethird of present costs. The per km operating cost of CNG scooters will be just 60 paise per km compared to Rs 1.88km for petrol, said officials from Mahanagar Gas Ltd.

Union petroleum minister Dharmendra Pradhan, who inaugurated the first run of 25 CNG scooters in the suburbs, said that if youngsters are encouraged, they could influence other members in their family to use clean fuel.

Mahanagar Gas's CNG kit for two wheelers comprises of two CNG cylinders of 1.2 kg each, which can run up to 120 to 130 km per kg at an approximate cost of Rs0.60 per km.

In the initial phase, the scooters will be retrofitted with a CNG kit manufactured by Lovato.

At present two kit manufacturers, namely ITUK and Lovato have got two-wheeler CNG kits approved by ARAI, Pune and ICAT Gurgaon, respectively. Lovato has got approval for 18 scooter models of various OEMs present in the market. With demand for such kits rising, other kit manufacturers are also expected to launch their two-wheeler kits.