The prototype of India's first solar - electric hybrid  was unveiled in New Delhi on Friday.T he prototype travels more than 50 km on a single charge at a top speed of 45 kmph 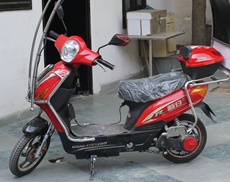 The prototype is a hybrid scooter that has a canopy of bendable solar panel.

It is the first of its kind vehicle in the country that can charge while being driven It is light weight, has a weather proof design and has the concept of mobile charging infrastructure. The prototype is a concept and other adaptations such as auto-rickshaws, buses, golf-carts, shuttles will be launched regularly within the coming 12 months.

According to ETI Dynamics, which unveiled the prototype at the Delhi Press Club, the addition of solar panel to the vehicle increases the distances the scooter is able to travel by 15-20 per cent thus providing more efficiency gains.

Rajneesh Wadhwa, chief operating officer, ETI Dynamics said, ''The electric vehicle market hasn't yet taken off in India due to high costs and lack of charging infrastructure. This is because the technology is restricted to very few platforms like cars. We need the entire eco-system to come up simultaneously which is what we are working on.

"Just like any electronic marketplace needs a critical mass of buyers and sellers to succeed, the same way electric mobility needs a large number of vehicles with an elaborate charging stations network to succeed. We are committed to bringing new technologies on the road coupled with charging infrastructure coming up at the same time.''

''The company will initiate pilots in five or six cities in India immediately in the coming months and expects the first batch of vehicles plying commercially on the road in the next 12 months. ETI Dynamics is working with a range of vehicle manufacturers and engineering institutions to bring prototypes to road. It is also creating a number of mobile phone applications that will help consumers locate charging stations, make payments, monitor battery performance etc.,'' said Sanmit Ahuja, Chief Executive, ETI Dynamics.

''The company is also in active dialogue with the Digit Group of USA and in partnership with Sunon Energy of India to transform the community and charging landscape in urban areas,'' he added.