The iconic Vespa scooter will make a come back in India, 12 years after its withdrawal by the Italian two-wheel major Piaggio, that had launched it in the country in the 1950s in collaboration with the Firodias. 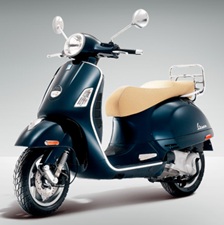 "We plan to invest €30 million ($38 million) to set up a manufacturing plant for Vespa scooter brand in India," said Ravi Chopra, chairman of the Italian company's Indian subsidiary, Piaggio Vehicles.

"We will launch the Vespa scooter by the end of 2011," Chopra told reporters on the sidelines of the annual conference in New Delhi of the Society of Indian Automobile Manufacturers (SIAM).

The iconic Vespa has evolved from a single model motor scooter manufactured in 1946 by Piaggio & Co. S.p.A. to a full line of scooters and one of seven companies today owned by Piaggio

The 1952 Hollywood blockbuster Roman Holiday in which Audrey Hepburn sidesaddled with Gregory Peck on his Vespa for a romantic ride through Rome played an important role in the scooter gaining iconic status.

The scooter itself is named after the wasp in Italian and was so called because of the high-pitched noise its engine makes as also its shape – a thicker rear, a narrow waist and a steering handle that resembles antennae. The pass-through leg area design in the front of the seat was aimed for women, as wearing dresses or skirts made riding a motorcycle a challenge.

The first Vespa's enclosed, horizontally-mounted two-stroke 98 cc engine acted directly on the rear drive wheel through a three-speed transmission. The early engine had no cooling, but fan blades were soon attached to the flywheel or the magneto, to push air over the cylinder's cooling fins.

The modern Vespa engine is still cooled this way. The mixture of two-stroke oil in the fuel produced high amounts of smoke, and the engine made a high buzzing sound like a wasp, the origin of the brand name - Vespa is both Latin and Italian for wasp.

Hollywood personalities John Wayne, Lucia Bosé and her matador husband Luis Miguel Dominguín, Marlon Brando, Dean Martin,  and Charlton Heston are all known to have had a fondness for this wasp of a machine

In India, the scooter ruled the Indian roads for 20 years, in collaboration with the Firodias, but the government of prime minister Indira Gandhi declined to renew its licence in 1971 which led to the emergence of the famous Bajaj 'Chetak'.

The company returned in 1983 collaborating with the Lohias of the LML group but had to withdraw for the second time after a protracted legal battle with its Indian partners.

The company has now made a solo entry and according to Piaggio officials the new manufacturing facility would be set up in Baramati, Maharashtra with a production capacity of 150,000 units per annum.

The new Vespa will have a 125cc gearless engine and according to Chopra the company would also launch a light commercial vehicle in the category of 0.5 tonnes over the next two-three weeks. 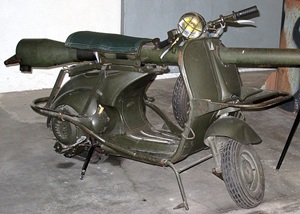 In the 1950s a licensed assembler of Vespas in France, Ateliers de Construction de Motocycles et Automobiles (ACMA), modified the Vespa to transport a M20 75 mm recoilless rifle, which was used in the 1950s by the French Airborne Forces.

Known as the Vespa 150 TAP, a M20 US-made light anti-armour cannon  capable of penetrating 100 mm of armour was mounted on the frame of the Vespa.

The scooters could be para-dropped in pairs, accompanied by a two-man team. The gun was carried on one scooter, while the ammunition was loaded on the other.