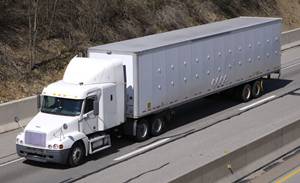 The move comes as a key component of president Obama's broader plan to tackle global warming.

The rationale was unassailable - even though trucks make up only 5 per cent of vehicles on the road, they contribute 20 per cent of greenhouse-gas emissions from transportation (since they were in constant use).

The EPA has proposed increasing fuel-economy standards for new medium- and heavy-duty vehicles from 2021 to 2027 - a move, it said would cut US oil consumption by 1.8 billion barrels.

Truck owners would need to  pay a higher price upfront for these efficient vehicles (about $12,000 more, on average), but according to the EPA they would actually save money over the long run through lower fuel costs.

The new rules aim to cut heat-trapping carbon emissions by 24 per cent by 2027 even as they cut 1.8 billion barrels of fuel over the lifetime of the vehicles sold under the rule.

The Obama administration has taken several environment al measures, including a new federal rule regulating small streams and wetlands and a separate rule to restrict greenhouse gas emissions from airplanes.

The administration was also expected to move forward this summer on cutting carbon pollution from coal-fired power plants, a rule Republicans in Congress had vowed to stop.

According to transportation secretary Anthony Foxx, the new rules would help the environment and the economy, as trucks would use less fuel and cut shipping costs. He called the rules ''good news all around.''

Under the new rule, a best-in-class, long-haul truck carrying 68,000 pounds (30,844 kg) of cargo would be expected to get at least 10 miles per gallon, up from a range of 5 to 7 miles per gallon today, according to the EPA. The officials said vehicle owners would recover the costs associated with the rule within two years due to reduced consumption of fuel.

The American Trucking Association said industry generally supported the new rules but harboured concerns that it might result in use of technologies on vehicles before they could be fully tested.

The National Automobile Dealers Association and American Truck Dealers slammed the rule, saying on an average the cost of a new truck would increase by $12,000.