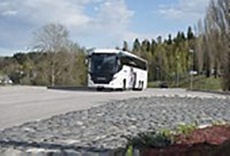 The bus, which can lower carbon dioxide emissions by up to 90 per cent compared to vehicles run on fossil fuels, was later flagged off by union minister for road transport and highways, shipping and rural development Nitin Gadkari in the presence of Nagpur Municipal Corporation officials and other company executives.

The ethanol-fuelled bus of Scania also boasts of an engine complying with Bharat Stage 5, which is a huge step to minimise emissions further, managing director of Scania Commercial Vehicles India and senior vice president of Scania Group, Anders Grundströmer said while handing over the bus to Nagpur Municipal Corporation.

''We are delighted and proud to be able to venture this unique initiative along with the NMC. This represents an important step towards our common goal, the realization of energy-efficient and sustainable public transportation solutions in India. We have expertise and experience with ethanol run buses for more than 20 years. We view ethanol as the future for public transport. The use of ethanol as a vehicle fuel is the best example of what can be done here and now in sustainable development work to reduce greenhouse gas emissions and local air pollution,'' Grundströmer said.

Scania, he said, has also delivered ethanol buses for commercial service in Great Britain, Spain, Italy, Belgium, Norway and other countries. Ethanol accounts for around 90 per cent of renewable vehicle fuels available in the world today and can be sourced locally, which will reduce the need for import of oil. It is the most cost-effective biofuel in the market in terms of availability, infrastructure and accessibility, the company said in a release.

Compared to a conventional diesel engine, ethanol-powered vehicles can reduce fossil carbon dioxide emissions by up to 90 per cent. Ethanol also offers the best operating radius of the currently available renewable fuels for city centre and urban operations, it added.

"Public transport on ethanol buses is a cost effective way of reducing several of the city's environmental problems. The solutions we are now developing create the necessary preconditions for both more attractive forms of travel and also better living conditions in city centers, without requiring major investments in new infrastructure. With this ethanol bus we also introduce an engine complying with Bharat stage 5, which is a huge step to minimize emissions further. Biofuel is the sustainable solution for urban public transport here and now," Grundströmer added.

Scania has delivered ethanol buses for more than 20 years to countries around the globe with successful operational and environmental results. Ethanol fuel has much lower CO2 emissions compared to a diesel engine. The technology is mature and viable for intense everyday city service, as verified by bus operators in cities all over the world.

With its customer centric approach and with buses and trucks specially designed to meet local conditions and backed by world class service network and dealership in the country, Scania has gained a strong foothold with several new customers across the country for both trucks and buses.

''Scania's major focus is on changing the way India views transportation by bringing in new and innovative technologies through constant R&D in India followed by entry into a wide range of industries and segments.

''The ethanol bus is one step towards achieving this objective,'' the company said.