Germany's MAN to increase stake in JV with Force Motors

Mumbai: The Abhay Firodia-promoted Force Motors (formerly Bajaj Tempo) has announced plans of cutting its stake in its heavy commercial vehicle joint venture (JV) with German truck maker MAN Nutzfahrzeuge to 50 per cent from the current 70 per cent. Force will sell its stake with German truckmaker MAN for Rs 300 crore.

MAN would increase its stake in the joint venture to 50 per cent. 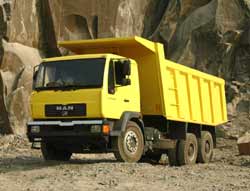 The joint venture produces trucks in the 16-49-tonne range with varying applications, from 40-tonne tractor trailers to 25-tonne tipper and rigid vehicles.

The company will begin designing and making trucks and bus chassis over the next few months and expand its presence in the Indian market.

The proposed change in the equity structure of the JV will take place in two steps. First, Force will sell 14.2 per cent stake to MAN for Rs 300 crore.

Next, MAN will acquire additional equity in MAN Force Trucks to reach a level of 50 per cent share participation by putting in Euro 40 million (around Rs 2.5 billion) in the JV through subscription of a rights issue. Force will refrain from subscribing to the issue and hence MAN`s stake will rise to 50 per cent from the current 30 per cent.