JPMorgan Chase chief executive Jamie Dimon and dozens of JP Morgan executives in 11 US cities, along with banking regulators, have received at least 50 anonymous death threat letters, with a dire warning of a series of attacks ending in an Oklahoma City-like bombing because Morgan's acquisition of Washington Mutual in a deal brokered by the US government, for a fraction of the price that had been offered for the group in March. 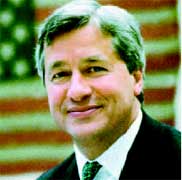 Jamie Dimon, seen by many seen as a potential US treasury secretary if Barack Obama wins the presidential election, was the target for the threats, with one letter saying "You need to be pay back. You will be killed in 10 days."

Another, letter to the bank chief warned of a terror attack, similar to the Oklahoma City-like bombing.

All letters, typewritten and from the same source, contained harmless calcium powder with a series of spelling mistakes ''Steal tens of thousands of people's money and not expect reprercussions,'' read one, which was written in all capital letters and includes the misspelling. The letter also said, ''It's payback time. What you just breathed in will kill you within 10 days.''