The Income Tax Department has seized huge amounts of new and old currency in Bengaluru, Panaji and Faridabad and arrested four person in connection with stashing away of unaccounted cash as investigating agencies expanded raids across country. 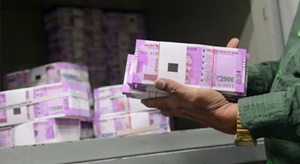 In it post-demonetisation flushing operations, the Income Tax Department recovered huge amounts of both old and new notes in raids from Bengaluru, Panjim and Faridabad besides the national capital.

The I-T Department seized Rs2.25 crore in new currency in Bengaluru, while Rs68 lakh has been seized in Panjim. In Faridabad, four persons were arrested with new currency of over Rs25 lakh – all in the new Rs2,000 notes.

In the national capital Delhi, yet another raid was carried out at a hotel in Karol Bagh, following which a massive amount of Rs3. 25 crore was recovered in old notes. The money was found to belong to some Bombay-based hawala operators, who have hired packaging specialists who pack these notes in a way to avoid detection at the airport while passing through scanning machines.

They are reported to be using a particular type of tape and wires in packing the notes, which then passes through X-ray undetected.

The IT Department has seized the cash and is analysing the mobile details which allegedly contain details of lot of other hawala operators.

In a joint raid earlier by the I-T Department and the Delhi Police, Rs10 crore was recovered from a law firm in Greater Kailash area.

During an investigation, the IT department found out that some cash was hidden in a car in Vellore, upon which it was discovered that all currency was in the form of Rs2,000 notes in 12 boxes of Rs2 crore each. Upon interrogation of those detained in Chennai, a breakthrough was made in the recovery of this cash wherein the IT sleuths laid a trap for the person transporting Rs24 crore in Vellore and subsequently seized the currency.

Following demonetisation, the Enforcement Directorate (ED) had carried out massive raids in 50 branches of 10 banks across the nation in an attempt to keep a tab on those account holders, who deposited huge amounts at one time.

Meanwhile, in Maharashtra, police on Tuesday detained three people in Thane, near Mumbai with over Rs1 crorw in new Rs2,000 notes in their possession, following a tip-off.

''The tip-off indicated that some men would be coming to Thane to exchange old high denomination notes for new ones. Acting on the information, we laid a trap near Thane Civil Hospital. The three suspects reached the spot in a Toyota Innova, and on searching the car, we found Rs1,00,44,000 in cash in Rs2000 notes,'' said an officer with the Thane Police.

The trio was then taken to the Unit I office along with the car and the currency for further questioning. The Income Tax department was also informed, and a team is expected to reach Thane to quiz the trio later in the night.

In another such incident, the Koparkhairane police on Monday detained two people - Hansraj Rathod (23), resident of Kopri village in Koparkhairane and Ramesh Gohil (26), a resident of Vashi - with Rs23.70 lakhs in Rs2,000 notes.