All I-T refunds to be channeled through bank accounts: CBDT chief

The department is also planning to end the current system of sending I-T refunds over the value of Rs50,000 in cheques through the postal department, Anita Kapur, chairperson of the Central Board of Direct Taxes (CBDT), said during a recent interaction with the media. 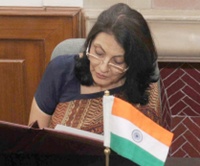 She said the plan, which is being worked out on priority basis, would help bring an end to taxpayers' grievances regarding the tax refund process.

She said CBDT has already got in touch with banks and the Reserve Bank of India (RBI) to ensure a smooth transfer of refunds.

Banks, Kapur said, as per the existing practice, go by the account number and do not try to match the name and account number, which could create problems if the number or the name is incorrectly entered.

"We have a large number of instances where people quote wrong account numbers and, if we were to send refunds to those account numbers, and the banking system does not match the account number with the name, then the chances of taxpayers being further aggrieved are much larger," Kapur said.

"Now, we are trying to work out a system that when a taxpayer gives his account number and if we can do some kind of prior matching with the bank... That is one step we are going ahead and if we get the comfort-level that the bank account number and the name of the taxpayer matches, we should be able to push all refunds automatically to the bank account rather than sending them through speed-post, which is the current practice," she said.