Investment guru Mark Mobius has joined Mumbai-based Equanimity Investments investment committee, where he is an investor, along with managing partner Rajesh Sehgal. Equanimity is a recently launched venture capital fund that invests in early-stage businesses. 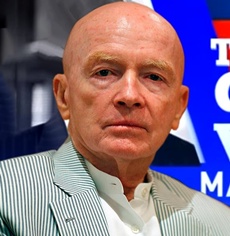 Mobius, 81, one of the most prominent voices on emerging market investments, retired as executive chairman of Franklin Templeton Investments after three decades at the firm.

In an interview with CNBC-TV18 Mobius, formerly heading Templeton's Emerging Markets Group, said, ''We are very positive about India. We think India is now at the take-off stage and will probably surpass China in terms of growth going forward.''

Equanimity is a sector-agnostic fund which invests in early-stage companies which use technology as their backbone.

"I am of the view that going ahead, it will be difficult to deliver alpha performance in listed equities. However 10 to 12 per cent is doable for the overall market as a whole," says Sehgal.

"The unlisted space compared to the listed space is lucrative where internal rate of return expected is going to be significantly higher than the listed markets by a factor of 2 or 3."

Of the $30 million (Rs200 crore) the fund plans to raise, Sehgal has raised Rs70 crore. A large chunk of the funds have come from him, while his mentor Mobius has also has put his own personal wealth in the fund – though, as he himself says, it is not a very large amount - and is on the investment committee.

For Mobius, India would be the second country where he is investing in the early stage ecosystem. While he has looked at many emerging and frontier markets, so far he has only invested in Vietnam apart from India.

Investment guru Mark Mobius said on Monday he is starting a fund management firm which will invest in emerging and frontier market companies focused on environmental, social and governance (ESG) ideas.

The fund will be an open-ended long-only one, with its management firm based in Luxembourgand London.

''I am interested in India on a portfolio management side because I am starting a new company in London with expressed purpose of investing in emerging markets and the focus will be on ESG – environmental, social and governance aspects. So I am now interviewing various research organisations here in India who might be able to help us in our effort and we hope to be able to launch something by the middle of the year,'' Mobius told CNBC-TV18.

On his equanimity investment, Mobius said, ''I cannot give you the exact amount, that is confidential but it is reasonably significant in the context of what he (Sehgal) is doing and his emphasis of course is not necessarily ESG. His emphasis is on technology - rural market technology - that is what I think. In our case, in the company that I am starting in London, the emphasis will be on ESG and activist 'impact investing'.''