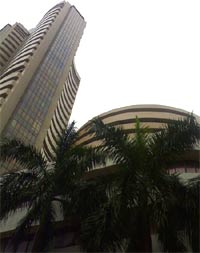 Announcing this, labour minister Bandaru Dattatreya said EPFO will make investments through exchange traded funds benchmarked to Sensex and Nifty for total of Rs5,000 crore this financial year. The investment cap will go up next year, he said in the presence of top market participants.

The first investment would be made through SBI Mutual Fund's two index linked ETFs - one to the BSE's Sensex and the other to NSE's Nifty.

The minister said EPFO will initially put only 5 per cent of its incremental fund flow, which would be around Rs5,000 crore, but the cap could be increased to 15 per cent next year.

The return from the ETF investment will be more than the 8.75 per cent the EPFO offers to subscribers now, he said.

"We expect that the return be given to 4.67 crore subscribers of EPFO, which started investing 5 per cent of its incremental fund of Rs1,00,000 crore, to be more than the existing return of 8.75 per cent," the minister said after making a formal announcement here today.

Chauhan said that investment of pension funds in stock markets is an internationally accepted practice and citizens world over have got better returns from such investments.

NSE chief Chitra Ramkrishna, who was not present at the event, said in a statement that EPFO's entry will unlock savings into nation building and other entities may consider similar initiatives.

The Index-based ETFs are universally considered amongst the safest investment avenues to help PF members accumulate robust retirement corpus over a long-term.

"Even though the EPFO, with its Rs 6.5 trillion corpus will be investing only 5 percent of its incremental flow by the end of the current fiscal, we will review the situation after that to decide whether we should increase it to 15 percent next year," Dattatreya said.