US President Barrack Obama on Thursday nominated Jim Yong Kim for a second five-year term as president of the World Bank, after his term expires in June next year. 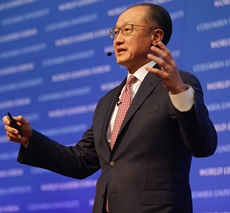 Kim's selection is in line with the tradition of an American being picked by the United States, the bank's largest contributor, as the World bank president.

Treasury Secretary Jacob J Lew made a statement signalling support to Kim's nomination shortly after midnight on Wednesday ahead of the first day of nomination on Thursday.

The bank's board announced on Tuesday that it was beginning to consider who would be its next president, inviting nominations as it did for the first time in 2012, even as World Bank watchers expected Kim to be reappointed.

The official deadline for nominations ends on 14 September.

The Treasury Secretary also lauded Kim, whose term ends next June, for spearheading the bank's response to the Ebola epidemic and the refugee crisis in Europe, the Middle East and North Africa, and for the ''needed reforms at the World Bank.''

The announcement comes at a time when the mission of the global development institution is in question. There have been persistent complaints by employees of the international financial organisation about his leadership and the role of the very institution he heads.

A letter this month to the bank board from the staff association, which urged consideration of other nominees, reflected both concerns - with Kim and the Americans-only tradition. ''We have accepted decades of back-room deals which, 12 times in a row, selected an American male,'' it said. ''This must change.''

''For two years running, made it painfully clear that the World Bank is experiencing a crisis of leadership,'' the staff letter noted.

A core complaint against Kim is that he is prone to making substantial changes with minimal consultation.

The tradition of Americans leading the bank dates to its creation at the end of World War II. This tradition continued in tandem with a European being named to lead the other major multinational financial institution, the International Monetary Fund.

Its president, Christine Lagarde, was reappointed in February

Kim, however, has the backing of emerging nations that include China, Brazil and India besides several other nations, including the Netherlands, Pakistan and South Korea.

Jim Yong Kim was born in South Korea but moved to the United States as a child and became a citizen.

In a reorganisation that has gone on for years, Kim has shifted the bank from a country-by-country focus on economic development to one that emphasises issues transcending borders, like health policies, climate change and refugee response. Morale has suffered, employees complain of Kim's lack of communication and some have left.

Kim, a former president of Dartmouth College, did not have the experience in economics and development finance typical of past bank presidents. In 2012, Obama officials lobbied scores of finance ministers for Kim, and dispatched him to meet some. The board ultimately appointed him by acclamation.

The board of executive directors of the World Bank met earlier on Tuesday under the chairmanship of dean Merza Hasan, to discuss the selection of the president of the World Bank Group, following notification from the current President Jim Yong Kim that he would be interested in a second term. Kim's term expires on 30 June 2017.

According to the board of directors of the World Bank, to be selected as the president of the World Bank Group, candidates should have a proven track record of leadership, experience of managing large organisations with international exposure and a familiarity with the public sector besides the ability to articulate a clear vision of the World Bank Group's development mission and a firm commitment to and appreciation for multilateral cooperation.

The candidate should also have effective and diplomatic communication skills, impartiality and objectivity in the performance of the responsibilities of the position.