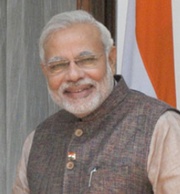 Prime Minister Narendra Modi today called on banks to work towards a cashless society to reduce the amount of unaccounted 'black' money floating in the economy.

"I wish Indian banks would compete to have more and more cashless transactions. This will help in keeping track of all transactions and reduce black money that circulates in the country," the PM said in Mumbai while dedicating ICICI's 'digital village' to the nation. The function also marked 60 years of the ICICI Group in the country.

Modi said people in India had a propensity to save, but this was targeted to gold. The challenge for banks is to assure people that a bank account would ensure easy access to their savings. He said if banks were able to do this, they could emerge as agents of social transformation.

Noting that the experience of ICICI over the last sixty years would prove immensely useful to India's economic development, Modi urged ICICI Bank to prepare a vision of tangible goals which they would achieve by the time they celebrated the 75th anniversary. As an intermediate target, he also asked the bank to think of what goals they could achieve by 2022, the 75th anniversary of India's independence.

The PM urged ICICI Bank to adopt a social charter of such tangible goals. He said many a time one institution takes the lead and others follow, generating momentum towards a good cause.

Chanda Kochhar, managing director and chief executive officer, ICICI Bank, said, "We are proud to have converted Akodara in Gujarat from a village into a digital village. Our objective has been to show that technology can be used to eliminate barriers that separate rural and urban India. We hope that it will catalyse similar initiatives across the country and recreate rural India."