Credit cards bearing the image of Karl Marx still continue to be popular in what was earlier East Germany before the Berlin Wall was shattered 20 years ago. 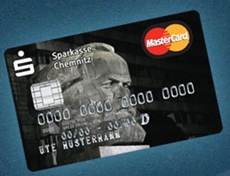 Marx, the original philosopher of Communism, has not been forgotten in Berlin, a satellite of the former Soviet Union. More than a third of customers at Sparkasse bank in Chemnitz opted for the picture of a bronze bust of the bearded 19th century German-born philosopher, whose stern face is depicted gazing towards the logo of Mastercard, bank spokesman Roger Wirtz said.

Before the fall of the Berlin Wall, citizens of Chemnitz - then known as Karl-Marx-Stadt - and the rest of East Germany would have seen Marx's face on their 100-mark banknotes, suggests Reuters.

Flattened during World War Two, Chemnitz was rebuilt as a model socialist city and still boasts a 7 metre-tall bust of Marx in its centre. The city has been economically depressed since the end of communism and its population has shrunk by 20 per cent.

The east of Germany has seen a wave of nostalgia in recent years for aspects of the old East Germany, or the Deutsche Democratic Republic as it was then known; with the 'democratic' part a standing joke.

The trend is not limited to the eastern region, however. "We've even received inquiries from clients in western German states asking whether they could open a local account with us to get a card bearing Marx's features," Sparkasse's Wirtz told Reuters.

A 2008 survey found 52 per cent of eastern Germans believed the free market economy was "unsuitable" and 43 per cent said they wanted socialism back.

Of course Marx lives on across the world, in one form or another. The Chinese have created their own brand of Communism; and in India while Marxist parties are currently marginalised, government policies in general continue to follow the socialist model.

But it is strange to find his philosophy still alive in the most prosperous country of capitalist West Europe – and perhaps a pointer to the general disillusionment with fiscal policies ever since jobs and started vanishing and investments melting in 2008.

At the height of the global fiancial crisis in 2008, Das Kapital, whichonce could only be found largely in libraries and old second-hand bookstores, suddenly began seeing robust sales most notably in Germany where people sought solace in the words of their countryman amid the financial crisis in which banks were sinking and the capitalist world order seemed to be disintegrating (See: Das Kapital sales shoot up amid financial crisis).