After pummeling Kerala in the south in August, heavy rainfall has set rivers in spate across the northern states of Himachal Pradesh, Punjab, Jammu and Kashmir and Haryana, leaving thousands stranded and killing at least 11 on Monday. 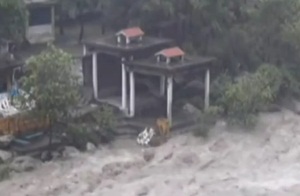 Incessant rainfall triggered flash floods and landslides in hilly regions of northern India, showing that India’s monsoon woes are far from being over. The India Meteorological Department (IMD) predicted fresh bouts of ‘severe’ rainfall across the country, sending states across the monsoon belt on high alert.
IMD has predicted heavy-to-very heavy rainfall from Himachal Pradesh in the north to Kerala in the south, and Arunachal Pradesh in the east to Rajasthan in the west. This is the second major alert this year after early monsoon and unprecedented rainfall wreaked havoc in the southern parts of India since May, triggering massive floods and devastating landslides.
IMD has forecast very heavy rainfall at isolated places over Arunachal Pradesh, Assam, Meghalaya, Himachal Pradesh, Uttarakhand, Haryana, Chandigarh, Delhi, Uttar Pradesh, and heavy rainfall over Andaman and Nicobar Islands, Punjab, Rajasthan, West Bengal, Sikkim, Karnataka, Kerala and Tamil Nadu.
An Indian Air Force chopper rescued 21 people stranded due to flash floods at Dobi in Kullu district in the last 48 hours.
In Jammu and Kashmir, five members of a family, including three minors, were killed on Monday when their house was buried under debris after a landslide in the Doda district. Fresh alerts have been issued in Jammu and Kashmir's Kathua after rivers were flowing above the danger mark following heavy rainfall in the area. Local authorities rescued people from various parts of the district and rehabilitated them to safety.
In Himachal Pradesh, nine districts have been put on high alert after torrential rainfall triggered massive floods and landslides across the state. Schools and colleges have been shut in Kangra, Kullu, Shimla, Sirmaur, Chamba, Mandi, Kinnaur, Solan and Hamirpur until situations get better after the rainfall and subsequent snowfall.
About 500 people were stranded in Lahaul, of which 249 rescued, while the state is estimated to have suffered losses of over Rs1,230 crore
An official said 249 people, including 45 IIT Roorkee students, were rescued from Sissu and brought to Manali through the Rotang tunnel by BRO personnel.
Hundreds of people were displaced in Kullu after heavy rainfall triggered flash floods in the region.
The state administration has warned people and tourists to stay away from water bodies to prevent any untoward incident, and those in need of an emergency can dial 1077 for rescue. On Sunday, video recordings showed a bus being flung into the river in spate and being washed away in Manali.
Heavy rains have so far claimed eight lives while hundreds, including school children, remained stranded across the state after rainfall continued for the third consecutive day, snapping over 200 road links. Spiti has already seen its first heavy snowfall of the season.
Meanwhile, Punjab chief minister Captain Amarinder Singh ordered all schools and colleges to remain closed on Tuesday due to rainfall alert in the state. Districts located downstream of Ravi, Sutlej, and Beas rivers have been put on high alert due to heavy rainfall in the catchment areas of Himachal Pradesh and Uttarakhand.
In nearby Chandigarh, authorities opened the floodgates of Sukhna Lake on Monday after water level crossed the danger mark.
In Kerala, which was affected by the worst floods in a century a month ago, a 'yellow alert' has been issued in Pathanamthitta, Idukki, Wayanad, Thrissur and Palakkad districts for Tuesday and Wednesday. The state disaster management authority has instructed district authorities to remain on alert and directed them to take necessary precautions in case situations go awry. The floods last month claimed more than 400 lives in the state, leaving lakhs displaced and causing widespread damage, estimated at over Rs20,000 crores.
MORE REPORTS