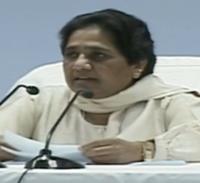 Mayawati said that under the new policy, developers would have to negotiate directly with farmers for land and the state government's role would be that of a facilitator.

Holding the centre responsible for the violence against land acquisition in Bhatta and Parsaul villages of Greater Noida, the chief minister also promised compensation to the farmers of the twin villages.

She demanded that the centre come out with a better land acquisition policy and also warned that her party would launch an agitation outside Parliament in the monsoon session if the issue was not resolved.

Mayawati said under the new land acquisition policy in UP, developers would directly acquire property from the farmers and the role of the government would be that of a facilitator. She said the party would try to ensure that a national policy on land acquisition was made on the lines of the policy in UP.

"The Bahujan Samaj Party government has consulted farmers to come up with a new land acquisition policy. The issues of farmers can be resolved only after direct talks with them," said Mayawati.