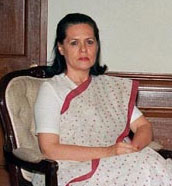 Ever since Mrs. Sonia Gandhi announced her abrupt resignation from Parliament and the National Advisory Council last Thursday, journalists and political analysts have focussed almost exclusively on the tactical aspects of her decision. Even the leaders of the BJP have been forced to admit that through this second act of self-denial Mrs. Gandhi has once more taken the wind out of their sails. Not even her most fervent supporters in the media have paid more than lip service to her own explanation of why she took this step - that it was the right thing to do.

The scepticism of the political analysts is understandable. If it was the right thing to do last Thursday, why was it not the right thing to do a month ago when the Congress itself launched a campaign against Jaya Bachchan on the grounds that she held an ''office of profit'', or on March 17 when the President expelled her from the Rajya Sabha with retrospective effect?

Conversely, why did the government scurry to adjourn parliament sine die, with the obvious intention of introducing an ordinance to define offices of profit, only when it became clear that 30 or more Congress MPs, including Mrs. Sonia Gandhi herself, could be expelled on the same grounds?

Not being privy to what went on at 10. Janpath, one can only speculate on the reasons why Mrs. Gandhi did not take control of the brewing crisis sooner. In retrospect it is clear that the government should have convened an all-party meeting to discuss the definition of offices of profit the moment it received the Election Commission''s opinion that Jaya Bacchan had violated the relevant provisions of the constitution.

It knew perfectly well that many other MPs and MLAs held similar offices, and that this had become possible because the term 'office of profit' had never been defined. Its failure to do so has opened it, and the Congress party in particular, to the charge that it was seeking to embarrass Mulayam Singh Yadav in the continuing, petty battle if wits that has been going on in UP ever since the Congress came to power in Delhi.

But almost no one has acknowledged that it is better to do ''the right thing'' late than not to do it at all. And literally no one has conceded that it requires far more courage to do it late than to do it on time, or not at all. For doing it late is an implicit admission that one had earlier made a mistake. And in today''s media-driven politics that is the one thing that political leaders cannot afford to do.