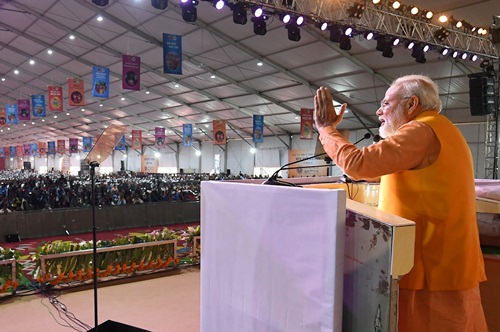 During his visit to Gorakhpur and Prayagraj on Sunday, the prime minister kicked off the implementation of the PM-Kisan scheme by directly crediting the first installment of Rs2,000 to the bank accounts of over one crore farmers across the country,
The prime minister congratulated the farmers for the launch of Pradhan Mantri Kisan Samman Nidhi. He also congratulated farmer families engaged in dairy farming, and fisheries, as they now have access to Kisan Credit Cards.
Addressing the gathering, the Prime Minister said that this day is etched in history, because the biggest scheme for farmers since independence, has begun today.
Addressing the gathering at the launch function, the prime minister said the government is determined to make the farmers capable and empowered. He said the government is working to provide all the necessary means to the farmers, to enable them to double their income by 2022.
About 120 million farmers are expected to benefit from PM-Kisan, the prime minister said, adding that through this scheme, Rs75,000 crore will be transferred to farmers’ accounts every year. He urged state governments to send the lists of beneficiary farmers to the union government at the earliest, so that farmers can receive the benefit of this scheme in time.
Giving details of the scheme, Modi said the first installment of the cash transfer will be directly deposited to the bank accounts of farmers in the next few weeks. The state government has been assigned the role of bookkeeper here. They just have to submit the list of farmers in their states and the centre will ensure that money is transferred to their accounts.
While openly attacking opposition ruled states, the prime minister issued a warning to those states haven't yet submitted their list of farmers, declaring that "if they don't submit the list then farmers in their states will destroy them." "You may be opposition parties but why do you have to play politics with farmers," he pleaded.
The prime minister said that while the loan waivers announced periodically by earlier Governments, did not provide long term or comprehensive relief to the farmers, PM-Kisan will not only provide them relief, but will also mark a massive investment in the rural economy.
The prime minister said the PM-Kisan depends on direct transfer, and therefore the entire amount will reach the beneficiary.
He said that the Government is also investing about Rs1,00,000 crore to complete long pending irrigation projects, which will be of great and lasting help to farmers in many parts of the country. He also mentioned the 170 million soil health cards, neem coating of urea, MSP for 22 crops at 50 per cent above the cost price, PM Fasal Bima Yojana, and the e-NAM platform.
The prime minister said farmers can now avail credit up to Rs1.60 lakh, through Kisan Credit Cards. He also touched upon other welfare schemes for the benefit of farmers.
The Prime Minister said that the entire region of Eastern Uttar Pradesh is undergoing rapid transformation. Industry, connectivity and the health sector are all witness to this change, he added.
He also said that about Rs10,000 crore worth of projects for the development of Gorakhpur and Eastern Uttar Pradesh have been either inaugurated, or foundation stone laid for. These projects, he said, will improve ease of living. He said that schemes such as PM AwaasYojana, UjjwalaYojana, Ayushman Bharat etc are symbolic of the spirit of SabkaSaath, SabkaVikas.
The PM also laid the foundation stone for several development projects in Gorakhpur before flying to Prayagraj at 1:30pm.
In Prayagraj, Modi took stock of arrangements at the Kumbh besides other programmes before flying back to Delhi at around 4:40pm.
MORE REPORTS