The ruling Bhartiya Janata Party has lost its hold in three key northern states of Rajasthan, Madhya Pradesh and Chhattisgarh with the opposition Congress getting into pole position as counting of votes for the five state assemblies of Chhattisgarh, Madhya Pradesh, Rajasthan,Telangana and Mizoram nearly concluded. 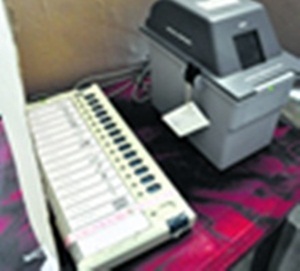 The poll reversals, coming just months ahead of the general election, could potentially be Prime Minister Narendra Modi’s biggest setback since he took office in 2014.
While the main opposition Congress party has a clear majority in Chhattisgarh, it may be able to form government in Madhya Pradesh and in Rajasthan with the help of smaller parties and independents.
In Telangana and Mizoram, however, regional parties are holding sway with the Telugu Rashtra Samiti (TRS) emerging winner in Telangana and the Mizo National Front (MNF) securing majority in MIzoram.
The Congress seems to have succeeded in whipping up anti-Modi frenzy among the rural folk in the same big heartland states that powered Modi to a landslide win in the 2014 general election.
BJP has been done down by rural dissatisfaction that Modi is doing nothing for the farmer and is instead serving the interests of capitalists may have helped strengthen the opposition.
The propaganda over the killings by the so-called save-the-cow brigade has also helped develop animosity against Modi and his administration.
The successive protest marches by farmers to Parliament have helped gather support for the Congress. The Modi government is also facing criticism that it has not delivered on the promise of jobs for young people and better conditions for farmers.
In Madhya Pradesh the Congress was leading in 113 of the 230 assembly constituencies while the BJP was ahead in 109, the BSP in 2 and others in 4.
In Rajasthan, out of the 199 seats, the Congress was ahead in 84 while the BJP was ahead in 61, the BSP in 3 and others in 14 constituencies.
In Chhattisgarh the Congress was leading in 66 seats against BJP's 17, while the BSP was ahead in 3 seats and others in 4.
In Telangana, the TRS was ahead in 87 seats while the Congress was leading in 20 seats, the BJP in 2 seats and others in 1.
In Mizoram, the Mizo National Front was leading in 26 out of the 40 seats while the Congress was ahead in 5 seats, the BJP in one and others in 8 seats.
Latest Tally