Chief Justice of India Tirath Singh Thakur on Sunday launched a scathing attack on government inaction in the matter of appointing judges, 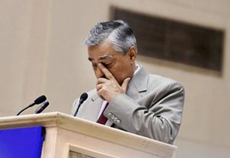 Breaking down several times in his half-hour speech addressed directly at Prime Minister Narendra Modi, who was present on the dais at the Annual Chief Ministers and Chief Justices Conference.

The CJI squarely blamed the union government for stalling the appointment of judges to the high courts, and for doing nothing to increase the number of courts and judges in the country, denying the poor man and under-trial prisoners due justice.

The Chief Justice queried what was the point of 'Make in India' and inviting foreign direct investment, when doubt among investors on the prospects of the timely delivery of justice was growing.

''Therefore not only in the name of the litigant  the poor litigant (he paused as his voice trembled with emotion) languishing in jail but also in the name of the country and progress, I beseech you to realise that it is not enough to criticise the judiciary  you cannot shift the entire burden to the judiciary,'' Chief Justice Thakur said in an unprecedented criticism of the government.

''I feel that if nothing else has helped justice, an emotional appeal might,'' Chief Justice Thakur told a gathering of his fellow Supreme Court judges, High Court Chief Justices, former Chief Justices of India, senior union law and justice ministry officials, dignitaries and the media at Vigyan Bhawan in Delhi as the Prime Minister and Union Law Minister D V Sadananda Gowda watched.

He said 434 judicial vacancies in the high courts are waiting to be filled up as of date.

''Once the litigation was over, a concerned Collegium cleared pending proposals for judicial appointments in six weeks. We had already appointed 54 high court judges whose cases were pending with us before the NJAC case. Fifty per cent of the proposals were turned down by us as we did not want the slightest blemish on the name of the judiciary. But 169 proposals are still pending with the government till now,'' CJI Justice Thakur said.

''Now how long will you take to process these proposals?  How long? When jails are overflowing  in the Allahabad High Court, 10 lakh cases are pending.''

Thakur, in his scathing criticism of the government, said the Centre chose not to lift a finger to help reduce the ''impossible burden'' judges carry and aid the cause of justice delivery despite a Law Commission report in 1987 warning that the country is slipping into a crisis where the ratio of the number of judges to the population is grossly inadequate.

He read out a letter from his predecessor, Chief Justice of India (retired) Altamas Kabir, who had written to then Prime Minister Manmohan Singh on 21 February 2013, requesting the latter to take steps to increase judges' strength over a period of five years to at least 50 judges per million.

Thakur then read out Singh's reply, in which the latter acknowledges that the number of judges has to be increased manifold, but ends his letter by passing the blame to the state governments for not taking the ''initiative''.

He said that at least five crore cases are filed every year and judges dispose of only two crore.

''Nobody talks about our disposal rates  there is a limit to what a judge can do, to his or her performance capacity. In the United States Supreme Court, nine judges sit together as a bench and decide only 81 cases in a year. Judges come from abroad and are amazed by what an Indian judge does in a year in a stress-filled atmosphere  yet we struggle on as the people have faith because we are doing our best,'' Chief Justice Thakur said.

He referred to how the Law Commission in 1987 had recommended 40,000 judges in the country to overcome the problem of pendency at that time. Its report had said that there were only 10 judges to a million people when there should be at least 50 judges per 10 lakh population.

Noting that the population has increased by over 25 crore since 1987, Chief Justice Thakur said the only solution to this ''extraordinary situation'' was to bring back judges from retirement in dispose of cases which are more than five years old.

He noted how setting up of Commercial Courts was close to Prime Minister Modi's heart but questioned its viability. He said merely naming an existing court as Commercial Court would only further delay the process of justice for the ordinary litigant.

"Speeches have been made in the past, debates have been held in the Parliament, but I think nothing is moving," Chief Justice Thakur said.

PM's impromptu response
The Chief Justice's remarks and appeal that it is ''time to protect the judiciary, which is one of the pillars of our Constitution'' saw Prime Minister Narendra Modi deliver an unscheduled speech immediately after the former took his seat.

Modi recounted how as Gujarat Chief Minister he had attended the same conference several times and heard speeches. He said how speakers in the conference had elbowed aside his suggestion for judges to reduce their annual holidays to help reduce pendency.

The Prime Minister said judges and the government should sit together and work for a more efficient tomorrow rather than dwell on the past and what was said in 1987.

He said the ordinary citizen has full faith in the judiciary and the government would not let that faith in the judges falter. He blamed the number of archaic laws that fill up the statute books, faulty or vague drafting of laws and their multiple interpretations by various courts as reasons for prolonged litigation.

''Some of these laws date back to 1880s. Somebody wants to do something, he is shown a law drafted in the last century and told to stop doing it,'' Modi said.