The Central Bureau of Investigations (CBI) today registered a first information report as the agency initiated its probe into the recruitments and admissions scam involving the Madhya Pradesh Professional Examination Board (MPPEB), popularly known as Vyapam scam. 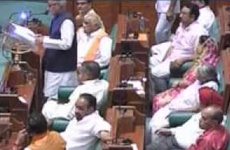 The CBI, in its first FIRs in connection with two cases of rigging of examinations, named among others a member of the Madhya Pradesh Backward Classes and Minorities Commission and his son.

The FIRs have been registered in connection with the Pre-Medical Test of 2010 and pre-PG Examination, 2011.

The central agency had on Monday taken over all Vyapam scam cases from the Special Task Force of Madhya Pradesh police on a directive by the Supreme Court.

The apex court had also asked CBI to probe the mysterious deaths of 49 people linked to Vyapam.

The CBI has named 21 candidates in the FIR in connection with Pre-Medical Test 2010, booking them under IPC sections related to criminal conspiracy, cheating and forgery among others, sources said.

In the second case against eight suspects in Pre-PG examination, 2011, the agency has named Gulab Singh Kirar, a member of the MP Backward Classes and Minorities Commission and his son Shakti Singh Kirar, among others.

Others named include former controllers of examination of Vyapam, Sudhir Bhadauria and Pankaj Trivedi.

The CBI has constituted a 40-member team headed by joint director R P Agarwal to probe the scam in which several high-profile politicians and bureaucrats are accused.

Meanwhile, reports quoting from an RTI query said Madhya Pradesh chief minister Shivraj Singh Chouhan had hastily ordered the appointment of Malay Rai, the then chief of the tainted Professional Examination Board (PEB), as a state finance commission member over phone from South Africa even the latter was at the centre of the raging Vyapam scandal.

According to RTI papers obtained by Vyspam scam whistleblower Ajay Dubey, the chief minister had ordered Rai's nomination over phone while he was in South Africa to invite businessmen and industrialists for a summit in his state. Rai's appointment papers were signed by Chouhan on his return.

Rai was chairman of the MP professional examination board, or Vyapam, in 2009-10, and the order (dated 6 June 2014) was issued even as the Vyapam scam was being investigated, the report pointed out.