The Devendra Fadnavis government in Maharashtra today adopted the Right to Services Bill after the assembly unanimously passed the legislation without the Congress and the NCP members voting on it. 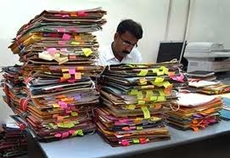 The state already has a law on RTS, which was enacted way back in 2005, which is still on paper and has never been implemented.

The Rights to Services Act had made it mandatory for the administration to ensure that decisions are taken in 45 days, although officials used to take cover of exceptions to stretch decisions for months and often years, without impunity.

Also, the ambit of the earlier law has not been made public. The Maharashtra government's law and judiciary department had earlier explained that the RTS Act did not apply to public sector corporations, and was only for administrative use but not for the public.

The law also required sanction for prosecution of bureaucrats by the Anti-Corruption Bureau.

While the earlier RTS Act talked of taking action in 45 to 90 days, this has now been stretched to more than six months, in the new bill. Moreover it does not specify which services will be notified and when.

The new bill is more specific in some respects - you can specify water connections, for example - though campaigners warn that the way it is drafted, it becomes useless.

The Congress and the NCP had boycotted the assembly proceedings over the issue of loan waiver for farmers and accusing the Fadnavis government of adopting "Gujarat model" of governance.

The opposition was annoyed when the government started the proceedings of passing the important Right to Services Bill by overlooking the opposition demand.

The speaker, however, conducted the question hour, took up calling attention notices and held discussion on the Right to Services Bill which was passed in the opposition's absence.

"Earlier in times of confrontation, the presiding officer and ruling party leaders had spoken to opposition members and brought them on board," Walse Patil said.

The opposition leaders rejected the government's appeal twice in which they were told to give up their protest and participate in the proceedings when the debate on farmers' issues would come up.

After the Right to Services Bill was passed, Prakash Mehta, who holds additional charge of parliamentary affairs, and education minister Vinod Tawde met the protesting opposition members and told them that the House had been adjourned and that the CM had invited them for talks in the speaker's chamber.