A day after it emerged that the UPA has no more role to play in government and that with a mere 44 seats the party cannot even assume the role of the Opposition, the union cabinet today recommended dissolution of the 15th Lok Sabha. 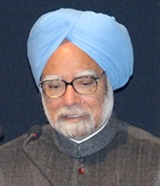 It also passed a resolution lauding the role of Prime Minister Manmohan Singh, who in turn submitted his resignation to the president.

Addressing the nation, before tendering his resignation today, Prime Minister Manmohan Singh said, "I address you today for the last time as Prime Minister of India. Ten years ago, when I was entrusted with this responsibility, I entered upon it with diligence as my tool, truth as my beacon and a prayer that I might always do the right thing," Singh said.

"Today, as I prepare to lay down office, I am aware that well before the final judgment that we all await from the Almighty, there is judgment in the court of public opinion that all elected officials and governments are required to submit themselves to.

In the run-up to new government formation, the union cabinet will meet later in the day and recommend to President Pranab Mukherjee for dissolution of the 15th Lok Sabha.

"I am confident of the future of India.The emergence of India as a major powerhouse of the global economy is an idea whose time has come," he said.

Stating that there had been many ups and downs in the past ten years, Singh said, "There are a lot of growth opportunities in IndiaI am sure that India will emerge as an economic might. I hope the next government works for the betterment for the country."

''I wish the incoming government every success as it embarks on its task and pray for even greater successes for our nation,'' he said concluding his brief address.

After the meeting, parliamentary affairs minister Kamal Nath called on the President recommending dissolution of the House.