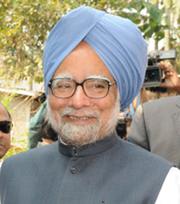 Under fire in the 'coalgate' scam, Prime Minister Manmohan Singh on Thursday said he was not ''above the law'', and offered to face the Central Bureau of investigation or "for that matter anybody" in the probe into allocation of a coal block to aluminium maker Hindalco.

Singh has long been under pressure as he was in charge of the coal portfolio around 2005, when most of the alleged misallocation of coal blocks took place. The opposition fire gathered momentum after the filing of a first information report (FIR) by the CBI against industrialist Kumarmangalam Birla, promoter of Hindalco, and former coal secretary P C Parakh.

"I am not above the law of the land. If there is anything the CBI, or for that matter anybody, wants to ask me, I have nothing to hide," he said on board his special plane on his way back from China after a two-nation visit.

He was asked about the clarification issued by the prime minister's office last week that the decision to allocate a coal block to Birla-headed Hindalco in Odisha was appropriate and there was nothing wrong. The opposition attacked Singh, saying he was charge of the coal ministry at that time and he should subject himself to questioning by CBI.

Initially, Singh appeared to be reticent in answering a question on whether CBI should be given so much autonomy that an inspector of the agency would be allowed to question the prime minister.

"Well, let me say, this matter is before the courts and I would not like to comment on it," he replied.

He was asked for his comments about the Supreme Court monitoring the probe in various scams affecting the decision-making process and adding to the government's image of being struck by "policy paralysis".

To a question whether CBI cases and scams were casting a shadow on his legacy as Prime Miniser, Singh shot back, "That is for history to judge. I am doing my duty and will continue to do my duty. What impact my 10 years of prime ministership will have is for historians to judge."