Northeast Delhi continued to witness arson and looting this morning, a day after protesters opposing the Citizenship Amendment Act (CAA) clashed with pro-CAA demonstrators, threw stones and set vehicles and shops on fire in an unprecedented hate show on Monday that left five people, including a policeman, dead and nearly 100 others injured. 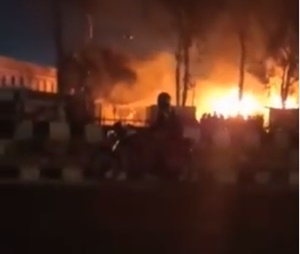 Around 20 police personnel were injured and have been hospitalised.
A wide swathe of north-east Delhi — from Jafrabad to Chand Bagh and Karawal Nagar — was wracked by communal riots and incidents of rampant vandalism on Monday as anti- and pro-CAA groups clashed for over seven hours.
Union home minister Amit Shah held a late-night meeting with the Delhi police chief, the union home secretary and other senior officials to review the prevailing situation in the city.
Delhi Police has also been put on very high alert following inputs by intelligence agencies that the riots in the city could intensify in order to put the international spotlight on Citizenship Amendment Act (CAA) with President Donald Trump in the capital.
Three firefighters have been injured after a group of people set a fire engine ablaze and threw stones at another. The violence began on Monday hours before United States President Donald Trump, was expected in the capital. Trump is expected to spend the day in Delhi for the operative part of his state visit.
Delhi Police said that fresh stone-pelting incidents were reported in Maujpur and Brahampuri areas on Tuesday and the situation remains 'very tense'.
A man, identified as Mohammed Shahrukh, was caught on camera confronting a lone policeman. He then opened multiple rounds of fire with a crowd of around a hundred people egging him on from a distance. He even pointed the gun at the cop’s face point-blank. Later in the evening, he was detained by the cops.
Reports said Shahdara DCP Amit Sharma, who was injured during clashes between two groups in Gokulpuri yesterday, is now is now conscious.
Social media is abuzz with criticism of the state going soft on anti nationals blocking roads and disrupting traffic and the courts that open at night for terrorists and their supporters are quiet when vandal put lives of common man at risk.
Two empty bullet shells found by RAF team from Brahampuri area.
Meanwhile, Rapid Action Force (RAF) team from Brahampuri area found two empty bullet shells. More details are awaited.
The situation is very tense. We are continuously receiving calls related to incidents of violence from Northeast Delhi. Commissioner of Police held a meeting at Seelampur DCP Office last night, ANI reported.
MORE REPORTS