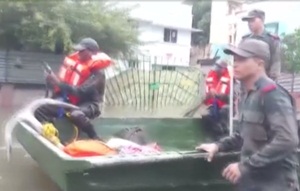 In Uttar Pradesh, at least 79 people have died since Thursday. According to a state government report, 25 people died on Saturday, 18 lost their lives on Friday and 36 the day before.
In an official statement, the UP government said that six people died in separate incidents of wall collapse in Fatehpur, Mirzapur, Rae Bareli and Chandauli, while three people died in Ghazipur due to lightning strike and house collapse.
In Gujarat, three women drowned after their car was swept away at a flooded causeway in Rajkot district on Sunday following heavy rains in several parts of Saurashtra region, officials said.
Floodwaters of Venu River is reported to have inundated the Sidsar temple complex in Jamjodhpur taluka of Jamnagar district following very heavy rain in the river basin on Sunday.
As many as 13 deaths were also reported on Saturday from Uttarakhand, Madhya Pradesh and Rajasthan following heavy rains.
Most of the 79 dams falling in Rajkot irrigation circle in Saurashtra were overflowing on Sunday due to very heavy rainfall for consecutive two days.
In Bihar, at least 24 people lost their lives due to the incessant rainfall since Friday. Heavy rain continued to batter Patna where three days of unprecedented downpour has flooded homes and hospitals, bringing life to a standstill for thousands of people. Three teams of the National Disaster Response Force have been deployed in the city and more rescue teams are expected to reach later in the day. Boats were out on roads for rescue operations.
The water level in major rivers, including Ganga, Koshi, Gandak, Bagmati, Mahananda, on the rise, is threatening to breach embankments at many places, and the state government has issued a 'red alert'.
The weather body has predicted heavy to very heavy rainfall at isolated places over Bihar, Sub-Himalayan West Bengal and Sikkim and Gujarat region.
IMD said squally weather is likely to prevail over Gujarat coast and adjoining northeast Arabian Sea and southwest Bay of Bengal.
The organisation has advised fishermen not to venture into these areas for the next few days. Heavy rains are expected in Eastern India, even as overnight showers brought down temperature in Delhi.
MORE REPORTS