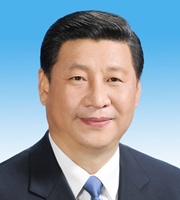 A day after trying to present himself as a champion of globalisation and free trade, Chinese President Xi Jinping on Wednesday said that nations should strive for a world where nuclear weapons are prohibited and where existing stocks are destroyed.

In a speech at the United Nations, the Chinese President said, "Nuclear weapons should be completely prohibited and destroyed over time to make the world free of nuclear weapons."

Xi also made a strong case for a global governance system based on equality among nations.

In a lengthy address at the UN`s European headquarters alongside with the world body`s new chief Antonio Guterres, Xi said, "We should reject dominance by just one or several countries", adding, "major powers should respect each other`s core interests."

"Big countries should treat smaller countries as equals instead of acting as a hegemon imposing their will on others," he said even as he projected China as a nation "committed to building a world of lasting peace."

Xi made the disarmament call and plea for sovereign equality towards the end of a four-day diplomatic tour of Switzerland, which included a landmark address at the ongoing World Economic Forum in Davos.

The Chinese leader's speeches at Davos and Geneva are seen as an attempt to grab the mantle of global leadership from the United States.