Chief of Naval Staff Admiral Sunil Lanba has been appointed Chairman of Chiefs of Staff Committee. He will take charge from Indian Air Force Chief Arup Raha who retires on 31 December. 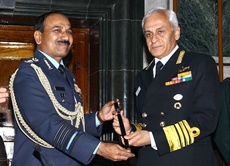 The Chairman of CSC will also be responsible for advising the government of India and ensuring jointsmanship in the armed forces.

Lanba took charge as the Chief of Naval Staff on 31 May from Admiral Robin K Dhowan. He will hold office till May 2019.

The Chief of Army Staff Gen Dalbir Singh, who also retires from service on 31 December 2016 and principal staff officers of all three services and HQ Integrated Defence staff were present on the occasion.

Admiral Lanba assumed command of the Indian Navy on 31 May 2016. He is a navigation and direction specialist and has served onboard numerous ships in both the Eastern and Western fleets. He is an alumnus of the National Defence Academy (NDA), Defence Services Staff College (DSSC), Wellington, College of Defence Management (CDM) and Royal College of Defence Studies, London.

During his distinguished career, he has commanded frigates, destroyers and was the Executive Officer of the aircraft carrier, Viraat. He has held many coveted appointments such as Fleet Operations Officer of the Western Fleet, Chief of Staff Southern Naval Command, Chief of Staff Eastern Naval Command and Flag Officer Commanding–in–Chief of the Southern and the Western Naval Commands. Admiral Lanba also has had instructional tenures at NDA, CDM and National Defence College. As Vice Chief of Naval Staff, Admiral Lanba strived towards integration and jointness. In recognition of his dedication towards service, Admiral Lanba has been awarded the Param Vishisht Seva Medal and the Ati Vishishit Seva Medal by the President.

Air Chief Marshal Arup Raha, the outgoing Chairman, COSC had taken over as Chairman COSC on 1 August 2014. Under his stewardship as Chairman, COSC, the services received a vital boost in jointmanship. During his tenure the defence communication network got operationalised and training standards of the Tri Service Institutes such as NDA, DSSC and CDM were enhanced. The much awaited National War Museum got approval from the government. He was instrumental in enhancing the role of military diplomacy with friendly foreign countries. Various humanitarian assistance and disaster relief operations during crisis situations both within and outside India such as J&K floods, Chennai floods, evacuation of Indian and foreign nationals from Yemen and Nepal earthquake were successfully conducted. He also played a pivotal role in formulation of DPP–16 thereby streamlining and fast tracking defence procurement which has so far been plagued by laborious procedures and long delays, says a defence ministry release.