A court in Pune today handed down the death sentence to Mirza Himayat Inayat Baig, a member of the Indian Mujahideen which is held responsible for the February 2010 blast in Maharashtra's second-biggest city that killed 17 people and injured at least 64 others. 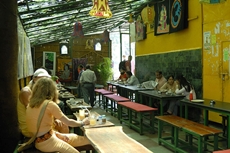 The terror attack on German Bakery, a popular hangout for foreigners, had killed 17 people and injured 64 in February 2010. On Monday, Pune sessions court special judge NP Dhote had held Baig guilty in the case.

Baig, 31, is the only accused to be arrested, tried and convicted for the attack.

The judge passed the ultimate sentence on Baig for murder and criminal conspiracy, as well as contraventions of the Unlawful Activities Prevention Act and the Explosive Substances Act.

Himayat Baig's family has been quick to approach the organisation Jamiat Ulema-e-Hind for legal help in taking the case to the higher courts.

Baig's brother Tariq Baig and other relatives have met Gulzar Azmi, who heads the legal cell of Jamiat Ulama-e-Hind.

''The family members of Himayat Baig … claim that he was innocent and falsely dragged into the case by the Anti-Terrorism Squad (ATS). We will decide to take up the case only after studying the copy of the judgment,'' Azmi said.

Baig, a resident of Maharashtra's Beed district, was held guilty under several provisions of the Indian Penal Code, including Sections 302 (murder), 307 (attempt to murder), 435 (mischief by fire or explosive substances), 474 (forgery), 153(A) (promoting enmity between different groups on ground of religion, race, place of birth, language and doing acts prejudicial to maintenance of harmony) and 120(B) (criminal conspiracy).

The court accepted the prosecution's contention that it was a "carefully planned and executed attack calculated to terrorise the public in general by causing extensive damage to life and property and that the primary objective was to undermine and reduce faith of the common citizen in the elected government and destabilize the system of law."