More reports on: In the news, Indian Navy 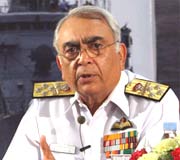 New Delhi: Outgoing navy chief, Admiral Sureesh Mehta, has said the present system of having a chairman of the chiefs of staff committee (COSC) was working fine but the armed forces would need the services of a chief of defence staff (CDS) as they step into a larger strategic setup. The chief was addressing a press conference ahead of his last day in office on Monday.

"Within the existing limitations, it (COSC system) is working fine...but in the due course of time as we go on to have a larger strategic set up, we will certainly need a CDS," he told reporters here.

"It would be difficult for one of the services chiefs to devote so much of time," he added.

He also said the Indian Navy would soon receive a Russian nuclear submarine.

As for the contentious Adm Gorshkov (INS Vikramaditya) aircraft carrier issue, Adm Mehta said the country would soon complete negotiations over its price, for possible delivery by 2012.

He said in all likelihood the final price of the Russian-built carrier will be settled in two days time. Currently a Russian delegation is in the country to finalise the hiked price for the warship.