Chief of Army Staff General Bipin Rawat has taken over as the new Chairman of Chiefs of Staff Committee, the Tri-Services integrated command and control centre of the defence forces. 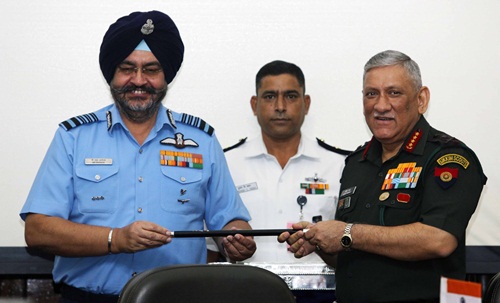 The Army Chief received the Chiefs of Staff Committee (COSC) baton from outgoing Chief of Air Staff Air Chief Marshal Birender Singh Dhanoa, at a brief ceremony in New Delhi today.
The outgoing Chairman COSC, Air Chief Marshal Birender Singh Dhanoa, with immense operational and flying experience across the entire spectrum of fighter aircrafts of the Indian Air Force, has been at the forefront of all issues related to the three Services.
The Air Chief Marshal was appointed Chairman COSC on 31 May 2019. Under his stewardship, the Services achieved jointmanship and integration on a number of fronts with the motto ‘Victory through Jointness'.
General Bipin Rawat, has had an illustrious career with vast operational and staff exposure spanning 41 years. As the Chief of Army Staff, he has been a member of COSC since January 2017. During his tenure in COSC, the Committee has deliberated on a number of diverse issues ranging from operations, training and administration, with an aim to enhance jointmanship and integration. General Bipin Rawat, with his foresight and professional acumen, has contributed immensely to the committee with his non-partisan views on critical issues.
As the next Chairman COSC, General Rawat is focused on operationalising the appointment of Chief of Defence Staff (CDS), enhancing Tri-Service integration, stimulating simultaneous growth of the Services, rapid operationalisation and synchronisation of modern war fighting capabilities to ensure that the armed forces are well aligned for the future.
MORE REPORTS