US justice dept hauls UBS to court to force disclosures

The US justice department yesterday filed a lawsuit in the federal court in Miami to compel Switzerland's largest bank, UBS to disclose the names of as many as 52,000 Americans who evaded paying tax in the US by not disclosing their accounts that held cash and securities in secret accounts in UBS.

The US Internal Revenue Service had started a probe against UBS in June 2008 following revelations by a former UBS banker, Bradley Birkenfeld that he helped defraud the IRS by assisting UBS clients in avoiding US reporting requirements on income in Swiss bank accounts. 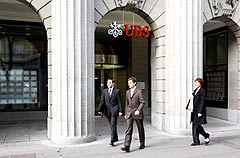 UBS employees helped wealthy US clients to conceal their ownership of assets held offshore by creating bogus entities and then filing IRS forms falsely claiming the entities owned the accounts.

The justice department lawsuit states that 32,940 Americans held secret cash holding accounts in UBS while 20,877 held accounts holding securities and the account holders had assets totaling $14.8 billion from the year 2001 to 2006 to which, they had avoided paying taxes in the US from the income earned from this secret accounts.

The lawsuit was filed despite UBS agreeing yesterday to pay $780 million to settle civil and criminal charges filed last year, where a US court granted the IRS to serve summons on UBS to obtain information on bank records (See: US wins court order for UBS bank records; steps up probe) to prove that the bank helped rich US citizens to open secret Swiss accounts and trusts or shell companies in tax havens such as the British Virgin Islands and Bahamas thereby evade paying US taxes.

Although, yesterday UBS agreed to give up the names and account numbers of a few American account holders, the US Justice Department has gone ahead and filed the lawsuit wanting to exert pressure on the bank to disclose all the 52,000 Americans who hold secret accounts in UBS.