Mumbai: Thirteen months since the Nano first wowed auto enthusiasts at its global premiere at the 2008 Auto Expo in New Delhi, Ratan Tata, chairman, Tata Motors and Tata Group has kept his promise of bringing out an affordable car for Indian buyers, notwithstanding the Singur imbroglio that led to a 5-month delay. domain-b's Arvind Sridhar reports from the venue.

Praising the team as the "the real heroes of the moment," Tata said in Mumbai, "I feel immense happiness that we have finally launched the people's car." Conceding that the biggest challenge the Nano team faced was to build it at the cost that he had dreamt of. 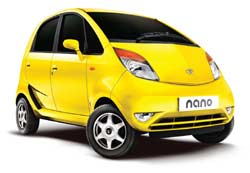 ''The Nano represents the spirit of breaking conventional barriers," Tata said at a press conference

"From the drawing board to its commercial launch, the concept, development and productionisation of the car has overcome several challenges. It is to the credit of the team at Tata Motors that a car once thought impossible by the world is now a reality.

"I hope it will provide safe, affordable, four-wheel transportation to families who till now have not been able to own a car. We are delighted in presenting the Tata Nano to India and the world.''

The Nano is currently being produced at its Pantnagar plant, Uttarakhand, in limited numbers.