Will the Nano still come for Rs1 lakh?

As the launch date for the Tata small car, the Rs1-lakh Nano draws closer, Tata Motors is facing vastly changed conditions from the time the car was unveiled. By Mohini Bhatnagar

At the January 2008 Auto Expo while unveiling the Nano prototype Tata Motors chairman Ratan Tata had promised to live up to the promised price tag of Rs1 lakh for the Nan, while commentators had maintanine that the company would live up to its committment, at least till the launch of the car this October.

In the seven months since then, a lot has changed that impacts the factors that impact pricing, notably the material input costs. 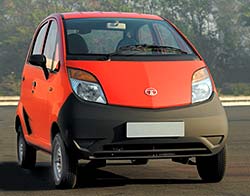 Since then consumers have been hit by double-digit inflation, soaring fuel prices, higher interest rates and higher excise duty on cars. And that is just on the demand side. Carmakers including Tata Motors are suffering supply side constraints such as rising prices of steel and other raw materials. On top of this, Tata Motors faces a hostile work environment in West Bengal leading  to disruption in operations and work schedules.

Notwithstanding the latter, Tata Motors new plant for Nano in Singur, West Bengal, is expected to go into operation in the final quarter of this calendar year. The facilities are to be expanded to meet increased demand in domestic and international markets in the future. The capacity of the first phase of the Singur plant is set at 2.5 lakh units.

Tata Motor's Annual Report 2007-08 quotes Ratan Tata the chairman of the company as saying, ''Rising fuel prices in India would adversely affect the company's sales this year while there would also be an enormous and unprecedented increase in material costs in steel, tires and the like,'' Tata said. In addition he says there will be also be the impact of tighter money supply with higher interest rates.

In the 12 months ended March 31, 2008 Tata Motors margins were hurt by rising interest rates, lower availability of vehicle financing and rising prices for raw materials, the company said in the report.