The potential target audience for the Nano does not seem as effusive as the media over the low price tag of the car, discovers Mohini Bhatnagar at the ninth Delhi Auto Expo

New Delhi: The hugely hyped launch of the Tata Rs1-lakh car has led to much speculation on Maruti Suzuki withdrawing the M-800 or, at least, reducing its prices substantially to compete with the Nano that is priced at half the prevailing price of the M-800. However, the ground realities may be different.

Walking towards the exit of the Delhi Auto Expo in New Delhi with a brief from my editor to get the views of 'king' consumer, I managed to get visitors at the Expo to talk about their views on the Nano and on the chances of their buying the Tata car. 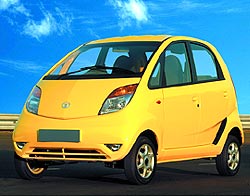 The answers took me rather by surprise. Contrary to the euphoric and eulogistic tone adopted by the media, the consumers appeared more cautious and displayed amazing awareness about automobiles in general.

Furthermore, since most of the responses came from small businessmen, sales executives and taxi drivers, the likely target audience for the Tata car, the Nano may not exactly be a runaway success for Tata Motors.

Shyam Kapoor, who owns an electronics repair shop in Karol Bagh and his wife Aruna had come to the Auto Expo especially to view the 'lakhatia' (anything that costs rupees one lakh) as the Nano has been dubbed in New Delhi. Aruna Kapoor says she would prefer the family buying a second-hand Alto or WagonR from Maruti True Value because these cars would be bigger and more comfortable. Further Suzuki cars are known for being hassle-free and low on maintenance. Kapoor also said prices of used car were also around the Rs1 lakh slot.

Taxi fleet operator Vinod Kumar has reservations on the pricing of the Nano. Saying he doubted that the company would stick to this price till its actual launch, he emphasised that the Maruti 800 came at an introductory price of Rs45,000 that was increased to Rs120,000 and even higher thereafter. He also doubted the 'great mileage' offered by the Nano, adding that the Indica  is being sold with the claim of giving 25km per litre but, even though it never manages more than 15km.