More reports on: Automotive, In the news, Cars

Ratan Tata talks on the making of the Nano

Ratan Tata rolls the window down and talks about the vision and conviction, the innovation and improvisation, and the leap of faith that went into creating the People's Car

The launch of the People's Car by Tata Motors is a defining moment in the history of India's automotive industry. For Tata Motors, the car - christened the Nano, because it is a small car with high technology - is the next big step in a journey that began with the Indica. For the Tata Group, it is the realisation of a pioneering vision to create a breakthrough product globally that rewrites the rules of the small-car business. 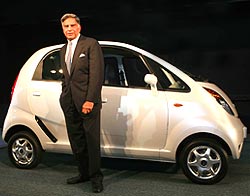 What does this path-breaking endeavour really mean for the Chairman of the Tata Group, in many ways the inspiration behind the car? That's what Christabelle Noronha, vice president, group publications & media, Tata Sons Limited, set out to discover when she met Mr Tata at Pune, as 2007, a momentous year for the Group, was drawing to a close.

The Tatas and you, in particular, are on the brink of realising a long-cherished ambition. Do you feel vindicated? Are you apprehensive?
There has always been some sort of unconscious urge to do something for the people of India and transport has been an area of interest. As urbanisation gathers pace, personal transport has become a big issue, especially since mass transport is often not available or is of poor quality. Two-wheelers - with the father driving, the elder child standing in front and the wife behind holding a baby - is very much the norm in this country. In that form two-wheelers are a relatively unsafe mode of transporting a family. The two-wheeler image is what got me thinking that we needed to create a safer form of transport.

My first doodle was to rebuild cars around the scooter, so that those using them could be safer if it fell. Could there be a four-wheel vehicle made of scooter parts? I got in touch with an industry association and suggested that we join forces and produce what, at that point, I called an Asian car: large volumes, many nations involved, maybe with different countries producing different sets of parts… Nobody took the idea seriously, nobody responded.

This was similar to what happened when we wanted to get going on the Indica. I had proposed a partnership with an industry body to create an Indian car, designed, developed and produced in India, something that could be conceptualised and executed as an Indian enterprise. Everybody scoffed at the concept. I remember people saying, "Why doesn't Mr Tata produce a car that works before he talks about an Indian car." My confidence got a boost when we finally succeeded with the Indica. Willy-nilly, we decided to look at [the low-cost car] project within Tata Motors.

It was never meant to be a Rs1-lakh car; that happened by circumstance. I was interviewed by the [British newspaper] Financial Times at the Geneva Motor Show and I talked about this future product as a low-cost car. I was asked how much it would cost and I said about Rs1 lakh. The next day the Financial Times had a headline to the effect that the Tatas are to produce a Rs100,000 car. My immediate reaction was to issue a rebuttal, to clarify that that was not exactly what I had said. Then I thought, I did say it would be around that figure, so why don't we just take that as a target. When I came back our people were aghast, but we had our goal.