Launched with much fanfare at the recent Auto Expo in New Delhi, the Skoda Fabia promises to deliver an experience like none other as India's “first super-hatch“. Is the Indian customer willing to spend Rs7 lakh on a car without a trunk? Sourya Biswas tries to find out.

''Do you have a petrol cap for my Skoda?'' asked the customer, only for the garage mechanic to respond, ''I think that's a fair trade''. Thus ran a joke on the perception of quality, or lack of it, of Skoda vehicles in foreign markets. Another hilarious gem went ''How do you double the value of a Skoda? Fill it up with petrol''. 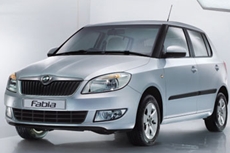 The times, they have changed a lot since then. Skoda is no longer derided as an East European manufacturer of substandard vehicles catering to Warsaw Pact countries, exhibiting their pedigree of erstwhile tank manufacturers to the Third Reich in the lack of refinement in their passenger cars. Now, it is recognized as a valued member of the premier European Volkswagen group, with several world-class products in its extensive repertoire. And this is reflected in the sales numbers and the smiles of satisfied customers throughout the world.

While certain Western nations have had to bear the brunt of Skoda's initial teething problems, customers from here have always held the brand in high esteem, and justifiably so. Skoda entered the Indian market with the super mid-range sedan Octavia, and followed it up with two more offerings in the premium sedan category – the Laura and the Superb.

Indian customers now had an alternative to the staple Mercedes-Benz, and that too at noticeably lower costs.

Skoda in India
In the meanwhile, the Indian car market expanded exponentially, with the major part of the growth coming from the hatchback category that had  the Hyundai Santro and Maruti Alto as the major players. The hatchback war further intensified with the introduction of premium hatchbacks in the form of the Hyundai Getz and the Maruti Swift, and the Indian customer was spoilt for choice. No longer were hatches considered entry-level vehicles only; their utility in cramped city conditions without compromising on safety and comfort really endeared them to the urban customer. Now, Skoda proposes to take the war to the next level with the introduction of what it calls ''India's first super-hatch'' – the Fabia.

India's first super-hatch
The Fabia is what would be called a ''super mini'' in European automotive parlance, and is currently in its second generation, its first avatar having been introduced as far back as 1999. After having undergone minor changes in 2005 and 2006, the completely refurbished and larger second-generation made its first appearance at the Geneva Auto Show in March 2007, and was available for purchase a month later.