Dutch electronics group Philips NV has developed an `intelligent pill' that contains a microprocessor, battery, wireless radio, pump and a drug reservoir and is capable of releasing medication in specific areas in the body.

Philips Research will announce its new intelligent pill technology, the `iPill', at this week's opening of the American Association of Pharmaceutical Scientists (AAPS) annual meeting and exposition at Atlanta, US, from November 16-20. 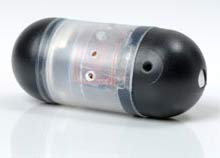 The `iPill' is targeted at assisting drug development and enabling new therapies for debilitating and life-threatening digestive tract disorders such as Crohn's disease, colitis and colon cancer, Philips said in a release.

The `iPill' is a capsule, the same size as a camera pill, and has been designed to be swallowed and to pass through the digestive track naturally. It can be electronically programmed to control the delivery of medicine according to a pre-defined drug release profile.

The `iPill' determines its location in the intestinal tract by measuring the local acidity of its environment.

The Philips `iPill' comes seven years after the US Federal Drugs Administration (FDA) approved the first camera pill for diagnostic applications in 2001.