Nissan to launch supermini March in India by 2010

Chennai: Thanks to the Singur imbroglio and the shifting of the plant site to Sanand in Gujarat, by the time the Nano hits the road in India, its competitors will be much closer to launching their versions of small cars. 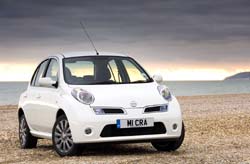 One such rival is Japanese automobile company Nissan Motor, which plans to launch a supermini, March, in India. According to Nissan the March will hit Indian roads by March 2010 or just 12 months after the Nano's launch.

Speaking to the press Nissan Motor India managing director Shouhei Kimura, ''The small, next-generation car 'March' will be launched in India by 2010 in the 'A' segment category.  The car would be manufactured at the company's plant situated at Oragadam in Tamil Nadu, though initially the car would be rolled out from the company's Thailand facility followed by India.

He said the development of an 'A' platform is one of various initiatives taken as part of Nissan's new five year business plan the GT 2012.

Kimura said, ''We would have a total of nine Nissan models by the year 2012 in the Indian market and this car would be one of the new models."

The company says the March would have a local content of 80 per cent. Kimura said India is one of the five leading competitive countries for manufacturing and exporting the car from Nissan's global manufacturing network.