Mercedes C-Class has achieved tremendous success in the mid-segment catagory by delivering more than 300,000 models in its first sales year. The new C-Class model series has also been received various German and international awards since its premiere.

The Mercedes C-Class has already been a success story since its introduction on 31 March 2007. The German luxury automaker has sold more than 300,000 C-Class models comprising sedans and station wagon variants. 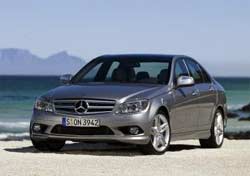 ''The sedan got off to an excellent start, and since its premiere at dealerships at the end of last year, the new C-Class station wagon has also been enjoying high popularity,'' stated, Dr Klaus Maier, executive vice president sales and marketing Mercedes-Benz Cars.

''Both models, in fact, have posted growth rates of 70 per cent  on the corresponding periods from the prior year since their respective launches. As a result, the new C-Class has been the worldwide leader in its market segment since the beginning of 2008,'' he added.

German customers also are very enthusiastic about the new C-Class: according to Germany's Federal Motor Transport Authority, the model was once again the top-selling vehicle in the mid-range segment in April. The C-Class has accounted for 25 per cent of  total sales in Germany. The company has sold 290,000 C-Class sedans from the 204 Series worldwide since its debut in the spring of 2007, and 25,000 customers have taken delivery of a new C-Class station wagon since that model variant was introduced in December.

Salient feature of the new C-Class is the clear optical differentiation between the model's three equipment lines. Along with the new model's distinctive design, C-Class customers are also attracted by the vehicle's even more dynamic chassis, which features a selective damping system that also offers great comfort. Other major selling points include a further refined telematics system with Bluetooth, and a new Linguatronic voice-command system.

In addition, the station wagon takes the trademark strengths of the sedan that includes safety, agility, and comfort, which it combines with a significant increase in spaciousness and versatility. With maximum cargo capacity of 1,500 litres, the new station wagon offers more space than any other premium station wagon in its segment. Given all these attributes, it's not surprising that the C-Class station wagon was also the top-selling model in its segment in Germany in April.