Can the Hyundai i20 battle the Maruti Swift?

Hyundai has upped the ante in the hatchback wars with the introduction of the i20. How does it stack up against the Maruti Swift and its cousin the Hyundai Getz? Sourya Biswas finds out.

Hyundai has upped the ante in the hatchback wars with the introduction of the i20. With this new car, the Korean giant hopes to replicate its earlier success with the i10, which had swept all the major Indian ''car of the year'' awards last year and endeared itself to the Indian public. But does the i20 have what it takes to overthrow the Maruti Suzuki Swift from its premium hatchback perch? . 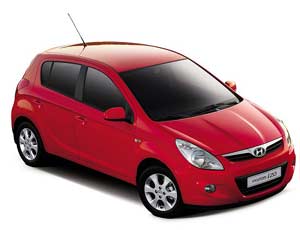 Before embarking on the merits and demerits of the i20 vis-à-vis the Swift, let's take a trip down memory lane and examine the adversarial relationship between Maruti and Hyundai in India. The Maruti 800 was the car that defined new-age motor cars in India, and with the Zen and Alto introduced in 1993 and 2000 respectively, the company offered everything the middle-class Indian customer wanted. Almost.

Along came Hyundai with its Atos in early-2000, and the small car scene in India was never the same again. For the first time in its illustrious career, Maruti had a serious competitor for the affections, and wallet, of the Indian customer.

The Atos, rebadged as the Santro, shocked many with its radical tallboy design, but proved to be an instant hit with buyers. Buoyed by an advertising tsunami spearheaded by the biggest star in the country, Shah Rukh Khan, and the continual facelifts, the Santro sold in huge numbers. But Maruti maintained its top position courtesy the Alto, the most popular entry-level car on Indian roads.

Hyundai didn't ''Getz'' it
Hyundai then sought to move up the hatchback value chain by offering the Getz. However, the Indian consumer wasn't willing to pay top rupee for a premium hatch and sales weren't encouraging. Of course, things weren't improved by Maruti introducing the Swift soon after, which effectively monopolised the premium hatch segment.

Hyundai's response was extremely intelligent. It saw a gap in the mid-level hatchback segment and moved quickly to capitalise on Maruti's absence in this segment. Hence, was born the i10. Positioning the car as ''launched in India, exported to the world'' was a risky gamble, but it paid off handsomely for Hyundai as auto journalists went into raptures over the car's punchy Kappa engine and polished interiors. They did not hesitate in crowning the i10 as India's ''car of the year'', and the Indian customer concurred.