Hyundai's new plant in Chennai will support its entry into an even smaller range of small cars, reports Mohini Bhatnagar.

Chennai: With the unveiling of the Nano from Tata Motors at the Nitnth Auto Expo in New Delhi last month, a number of carmakers have jumped on to the small car trail including Bajaj Auto, Renault Nissan, Toyota Kirloskar, Hyundai Motor, ford Motor India and Maruti Suzuki. All in all the focus has shifted squarely to small, fuel-efficient, space saving cars.

Smaller, automakers now seem convinced, can be beautiful to their bottomlines as the existing small segment gets crowded.

Renault Nissan will launch its own small (Yeni?) car while Hyundai has announced the launch of its own new small car that will be priced lower than the 'Santro' and might be on the roads within three years.

Bajaj Auto's small car will be launched after four years while Toyota and Ford will launch their small cars without specifying the timeframe.

Away from the Nano and the spotlight, Hyundai has been quietly focusing on its future strategy and its second manufacturing plant coming up in Tamil Nadu where the i10, launched in  November last year, is being produced (See: Hyundai adds style to the "A" segment with the i10)

"We are doing a feasibility study for our small car which will take another three years to make it a reality," Hyundai's senior vice president (marketing and sales) Arvind Saxena had announced at the inauguration of the plant. (See: Hyundai Motor India commissions its second Indian plant)

Saxena said that the car would be a little smaller in size but have more spacious interiors than its popular Santro and will be a market model, which achieves all global parameters. Following the opening of the plant the company also said that the small car would not compete with the Nano in price leading to conjectures that the new Hyundai car could be priced in the Rs1.5 to Rs2 lakh range. 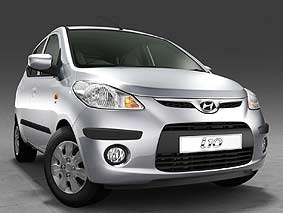 Hyundai's i10 has been a remarkable success, exceeding the company's expectations. It managed to beat Suzuki's cars in performance in the first quarter of the launch itself. In January this year while Maruti Suzuki's entry level M800 suffered a 22 per cent drop in sales to 5,470 units (against 7,021 units last year), and sales of Alto, Swift, Wagon R and Zen Estilo grew by a just  3 per cent, to a total of 45,957 vehicles, Hyundai posted a robust growth of 39 per cent in sales in the Indian market mainly due to strong sales of the i10. The company claims to have already sold 25,000 units of the car since its launch in the last three months.