Ford Motors' 2008 Ford Explorer is more resistant to damage and less likely to cause damage to other vehicles in low-speed crashes than other midsize sport utility vehicles, according to the Insurance Institute for Highway Safety (IIHS) report.

Mumbai: The 2008 Explorer retains that design, which helps to reduce damage to cars in common slow-speed incidents and allows lower vehicles' energy-absorbing bumpers to do their work. The Explorer is the only midsize SUV to receive the government's highest frontal crash test rating for six consecutive years.

''The Ford Explorer has been the benchmark SUV for family capability, safety and value for two decades,'' said Darryl Hazel, president, Ford Customer Service Division. ''Insurance companies are more likely to give Explorer customers discounts because of this established track record.'' 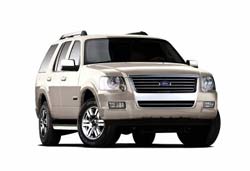 ''Ford has more IIHS Top Safety Picks than any other brand, and more government 5-star safety-rated vehicles than any other automaker in history,'' Hazel said. ''Part of this safety success is that our larger family and work vehicles are more compatible with smaller vehicles.''

The Explorer outperformed several other midsize SUVs in 10 mile-per-hour crash tests with the back of a typical midsize car. The test results will be used in the IIHS's petition to the National Highway Traffic Safety Administration for the standardisation of bumper height for all passenger vehicles.

''One big difference is that the Explorer's bumpers line up pretty well with those on cars, so when this SUV hits a car or a car hits it, the bumpers on both vehicles engage instead of over- and under-riding each other,'' said Institute president Adrian Lund. ''When cars collide with other cars, their bumpers usually line up pretty well, but in SUV-to-car crashes, the bumpers often don't match up at all. The result can be thousands of dollars of unnecessary damage in low-speed crashes.''