In a move which seriously undermines Detroit's position as an American auto manufacturing hub, Ford Motors has decided to make its next global car Fiesta not in the US, but in its southern neighbour Mexico.

The proposed $3 billion foreign investment in the Central American nation has been touted the largest of its kind with its president Felipe Calderón calling the deal a ''turning point.'' 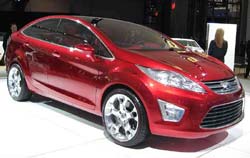 Unlike the general impression in India, the original Fiesta has always been a small subcompact. However, the fifth-generation Fiesta was rebranded and restyled in India as a four-dour sedan called the Ford Ikon.

On the other hand, the current Fiesta on the Indian roads is based on the actual fifth-generation vehicle, although the latter is not a sedan but a hatchback.

Ford's move will put more foreign money in one go into Mexico than any other manufacturing industry. Only banking acquisitions in the country have cost more. Some 4,500 Ford jobs are expected to be created and result in some 25,000 new direct and indirect jobs at suppliers.

"The auto industry has become consolidated as one of the pillars of our economy," president Calderon said. "It's one of the principal sources of exports, of foreign investment and, as a result, of jobs in the manufacturing sector."

Ford has two assembly plants in Mexico, and the hatchback will be built at the Cuautitlan facility near Mexico City starting in early 2010. The plant currently builds F-Series pickup trucks, US sales of which have been weakening as gasoline prices continue their march higher. This shift towards smaller vehicles is very much in tune with Ford's larger strategy in recent times.