Mercedes-Benz will launch the  the S 400 BlueHYBRID, its first passenger car model equipped with a hybrid drive system in summer 2009. The combination of a modified V6 petrol engine and a compact hybrid module makes the S 400 BlueHYBRID the world's most economical luxury saloon with a spark-ignition engine. The NEDC combined fuel consumption of 7.9 litres per 100 kilometres, makes the car one of the world's lowest CO2 emitting vehicle with 190 grams per kilometre.

Powered by a 3.5-litre petrol engine, it develops an output of 205 kW/279 hp. The electric motor generates 15 kW/20 hp and a starting torque of 160 Nm. The result is a combined output of 220 kW/299 hp and a combined maximum torque of 385 newton metres. Moreover, the new S 400 BlueHYBRID is the first series-production model to be equipped with a particularly efficient lithium-ion battery specially developed for automotive use. This is another major contribution by Mercedes-Benz to the electrification of the car.

The new Mercedes-Benz S 400 BlueHYBRID is based on the S 350, and features an extensively modified drive train. This encompasses a further development of the 3.5-litre V6 petrol engine, an additional magneto-electric motor, the 7G-Tronic seven-speed automatic transmission specially configured for the hybrid module, the necessary operating and control electronics, the transformer and a high-voltage lithium-ion battery.

The compact hybrid module is a disc-shaped electric motor that also acts as a starter and generator. The system offers a double benefit, as it both helps to save fuel and increases driving enjoyment. This is partly due to the booster effect of the electric motor, as it powerfully backs up the petrol engine with a maximum additional torque of 160 newton metres during the high-consumption acceleration phase. The driver benefits from the combined action of these two units in the form of even more impressive torque characteristics and smooth, effortlessly superior acceleration.

The hybrid module also has a comfortable start/stop function, which switches the engine off when the vehicle is at a standstill - for example at traffic lights. When it's time to move off again, the electric motor almost imperceptibly restarts the main power unit. This likewise makes a contribution to fuel economy and environmental protection: because the engine restarts first time, and practically instantly, emissions are also minimised during the starting phase. 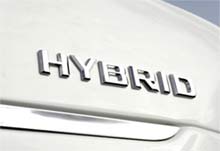 When the brakes are applied, the electric motor acts as a generator, and is able to recover braking energy by a process known as recuperation. Working in finely tuned partnership, the electric motor supplements the braking effect of the petrol engine and the wheel brakes to deliver a smoothly progressive braking action. The recuperated energy is stored in a compact yet highly efficient lithium-ion battery in the engine compartment, and made available when required. This complex system is managed by a high-performance control unit, which is likewise located in the engine compartment.