The new  M3 Convertible from the BMW stables feature a retractable hard-top roof and is powered by  the new V8 engine, which has won the 'International Engine of the Year' award.

The new BMW M3 Convertible has been optionally equipped with the very first double clutch transmission designed for a high revving V8 engine.Compared with the two previous generations of the M3 Convertibles the new E93 generation boasts a retractable hard-top, 4.0-litre V8 engine and manual six-speed gearbox as standard. 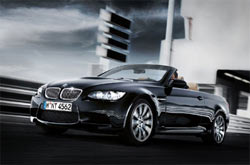 Mechanically identical to the hugely popular M3 Coupé, which was introduced last October, and voted Car of the Year by drive.com.au in December 2007, the new BMW M3 Convertible also introduces the new seven-speed M double-clutch transmission with Drivelogic. This advanced, electronically controlled transmission is available in the M3 Coupé from next month.

The new generation BMW M V8 engine was awarded Best Engine in the 3.0 - 4.0-litre class by the global judging panel of the International Engine of the Year Awards 2008.The convertible has been designed from the ground up as an open-top four-seater equipped with supercar performance and everyday driveability.

The 309 kW V8 engine produces 400 Nm of torque and sprints from 0-100 km/h in just 5.3 seconds in the six-speed manual transmission guise, while the double-clutch gearbox with its seven speeds and seamless gear shifting allows this sprint time to be reduced to an amazing 5.1 seconds.

The new M3 Convertible produces more than twice the power of the original 1988 E30 model, yet the spirit and design philosophy remains the same.